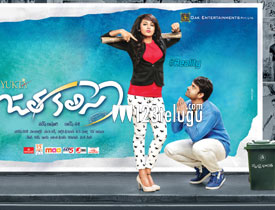 Continuing with the trend of small budget flicks, yet another film which has hit the screens today is Jatha Kalise. The expectations on this movie are soaring high ever since the news came out that happening producer Sai Korrapati has released the film. Let’s now see how the film turns out to be.

Rishi (Aswin) is a software employee who comes down to Vizag to attend his friend’s marriage. Due to some unknown circumstances, the wedding is called off and Rishi decides to leave back to the US and starts his journey to Hyderabad in a cab.

On the other hand, Tejaswi(Tejaswini) is an IAS aspirant who is going to Hyderabad to attend an interview. Accidentally, she gets into the same cab in which Rishi is also travelling. Rest of the movie showcases what all happens in this unique journey and how Rishi and Tejaswi end up falling for each other.

The backdrop chosen for narrating this love story is a major plus point of the movie. The comedy scenes featuring hero, heroine and Snigda evoke superb laughs. A 6 minute episode which is made up of spoofs of movies like Srimanthudu, Gabbar Singh and Bengal Tiger gives a huge relief to the film.

Climax of the movie is nice and has been executed well. Hero Aswin shows some improvement in his performance when compared to his last film. Tejaswi pulls off her role supremely well and impresses everyone in all the emotional scenes.

Snigda steals the show during the first half with her comedy timing. Rest of the cast have performed well in their limitations. The love track during the second half has also been well executed.

Novelty is missing in the characters of both hero and heroine. Even though the story line is good, the director has not able to generate enough emotions from the principal characters. Jatha Kalise has some traces of the hit film Journey.

Even though Aswin is good with his comedy, he could not generate the needed performance during the emotional scenes. The story looses its grip in certain areas and has some some glitches here and there during the first half.

Cinematographer Jagadish has captured the locations well and has given the film the right look which is necessary for a film with a road trip. Music by Sai Karthik is good but his background score is below par. Production values are fine.

Coming to the director Rakesh Sasi, he comes up with a good story line and manages to impress decently. Had he worked harder in bringing out enough emotions from the star cast and did not deviate from the main plot, the effect would have been even better.

On the whole, Jatha Kalise has some good moments going its way. The hilarious comedy scenes in the first half and the spoofs of various hit films in the end are huge assets of the film. But a weak screenplay, and some unnecessary travel scenes spoil the flow and make this film just a time pass entertainer this weekend. Watch it if you have nothing else to do.