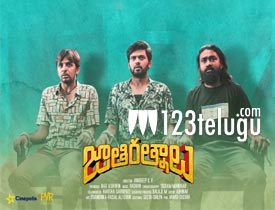 Jathi Rathnalu is a film that has created a solid hype in the last few days. The film produced by Nag Ashwin is out with a solid occupancy. Let’s see whether it lives up to the hype or not.

The film kicks off in the small town of Jogipet and is about three close friends played by Naveen Polishetty, Priyadarshi, and Rahul Ramakrishna. One fine day, the fit-for-nothing friends decide to find a living in Hyderabad and somehow manage to rent a posh apartment in Banjara Hills. But the twist in the tale arises when they are framed in an attempt to murder case set up by the local MLA(Murali Sharma). The rest of the story is as to how these three silly friends come out of the case.

As showcased in the trailer, the film is filled with tongue-in-cheek humor and lives up to all the hype in the comedy department. The dialogues are the biggest asset as the funny punch lines, satirical quotes work quite well in the film.

Naveen Polishetty, who proved his talent with Agent Athreya is on another level here. He is one of the main pillars of the film as his screen presence, comedy timing and dialogue delivery will leave you in splits. The climax portion featuring Naveen and Brahmanandam is superb as Naveen brings the house down with his crazy dialogue delivery.

Priyadarshi has a subtle character and does quite well in the film. The manner in which he delivers his lines and gives innocent expressions is to die for. He is an all-around actor and is a big asset for Telugu cinema. Rahul Ramakrishna also does well in the film with his unique behavior and phone conversations. Situational comedy is what the film is filled with and it works big time and keeps the audience entertained.

It was so good to see Brahmanandam after a long time and the legendary actor does well in the second half. All his courtroom scenes with heroine Faria are good. Speaking about Faria Abdullah, she makes a stunning debut and has an addictive smile. She is cute, has a good body, and delivers a good performance in her debut film.

The makers have told this before that the film is about silly characters and situations. This is true as some situations in the film look way over the top and a section might find it way too silly.

Also, the investigation scenes, the crime angle, and the logic in the film goes for a toss. If you get into the narration aspect and what’s happening with the proceedings, the film has many issues. But thanks to the nonstop comedy, the film moves on and on.

The production values of the film are very good. The music is a big asset and songs are nicely placed in the narrative. As mentioned above, dialogues are hilarious. The editing is decent and so was the camerawork which shows the film in a simple manner.

Coming to the director Anudeep, he has done a very clever job with the film. He has focused more on the fun part and lead cast’s characterizations. Because of this, he has left the logic aside and narrates the film with good comedy punches and fun situations. The comedy is slapstick but it has a lot of humor and keeps you entertained till the end.

On the whole, Jathi Rathnalu is an enjoyable comedy caper filled with multiple fun elements. It has slapstick comedy and logic goes for a toss. Also, the story and narration take a back seat but the tongue-in-cheek humor, satirical scenes, and solid punches dominate the show. If you ignore the slightly slow second half, this film ends as a fun theatrical watch this weekend.