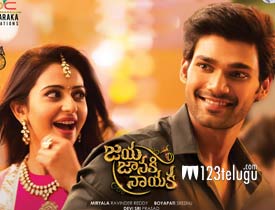 Mass entertainers specialist, Boyapati Sreenu has come up with his new film Jaya Janaki Nayaka. The film which has Bellamkonda Srinivas as the main lead has hit the screens today. Let’s see how it is.

Gagan(Sai Srinivas) is a rich kid who leads a happy life with his family. On the other hand, Sweety(Rakul Preet) gets impressed with Gagan’s grounded attitude and falls for him at once. When everything seems to be going fine, she leaves him all of a sudden and goes away with her dad. Why did she ditch him? What are the situations that lead to? and how will Gagan win his love back?. To know answers to these, you have to watch the film on the silver screen.

Boyapati Sreenu’s idea of making a beautiful love story with out missing his trademark elements is very good. After Badra, this is his full fledged love story. Rakul Preet Singh looks gorgeous and also shows superb modulation as the film gets serious. The entire film revolves around her character which is a major soul for the film.

Bellamkonda Srinivas has improved a lot and impresses with his dances and fights. Boyapati has designed yet another powerful character for Jagapathi Babu after Legend and JB gives a standout performance. Sharath Kumar and Nandu suit their respective roles well.

Bollywood actor, Tarun Araro was good as the baddie. Pragya Jaswal’s glamour show will be a treat for the masses. Special mention should go to the interval block and Hamsaladeevi episodes as they have been showcased in a stunning way.

One of the major drawbacks of the film is the lack of comedy. Boyapati should have worked on it for a better output. Yesteryear heroine, Vani Viswanath’s role is not up to the mark and not at all helpful to the proceedings.

After a superb interval block, the film falls flat and things become tedious for some time. The climax fight looks a bit over the top and the special number which comes in the pre climax was not picturized well. The film has a routine story line and nothing much is there to boast about it.

Boyapati Sreenu should be appreciated for his work as he satisfies the mass audience with enough fights and commercial elements. The only thing his direction lacked was the addition of comedy quotient. Editing by Kotagiri Venkateshwara Rao is okay but the film can be trimmed for five minutes or so.

Camerawork by Rishi Punjabi is brilliant as every frame looks very rich and lavish. Action stunts by Ram Lakshman are good as three major action blocks in the film are designed supremely well. Music by Devi Sri Prasad is good and his background score is apt for the genre of the film. Production values for this high budget entertainer are very rich.

On the whole, Jaya Janaki Nayaka is a typical Boyapati mark action love story which is clearly aimed at the single screens. The film which will find few takers in the overseas has a superb interval block, many action episodes and enough eye candy to please the mass audience big time. Even though the story gets predictable and pace of the film drops during the second half, this film makes up for a good time pass watch this weekend.