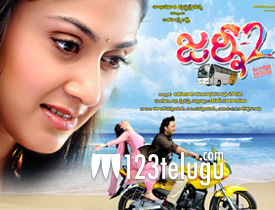 Pavitra(Manjari) is a young girl from Hyderabad who has the habit of scribbling interesting moral values behind buses. One fine day, she writes something interesting behind a bus which belongs to Vijayawada.

Manu(Ganesh) who belongs to the same town reads these wordings and gets mighty impressed. He too replies her back in the same fashion. The same procedure continues for a while as both Pavitra and Manu fall in love by writing about each other on the buses.

As time passes by, they decide to meet each other and pick up a meeting point. When each of them starts their respective journey’s, an untoward incident happens and make things go upside down. Rest of the story is as to how they solve their problems and meet each other finally.

Manjari is one of the biggest highlights of Journey 2. Right from the first frame, she gives a very decent performance. Manjari’s performance in the second half and pre-climax needs a special mention.

The story line of the film is a bit interesting. The conflict point of not seeing each other and falling in love has been dealt well in the initial part of the film. The message that is showcased about love and its value have been elevated well.

In certain scenes, the way the words are written on the bus and the main characters falling for that look over the top. Even though it is started well, things haywire after a point.

The proceedings are quite dull after the first few minutes and songs interrupt the flow of the film big time. The narration goes for a toss during the second half as important scenes have not been dealt well.

Yet another biggest drawback is hero’s role which is very unclear. His character lacks proper justification and the director makes it even worse with his logicless narration.

Camerawork of the film is below average. Editing is horrible and so are the production values. Music of the film is pretty bad and the songs also disturb the flow. Coming to the director Narayana, he has done a horrible job with the film. Other than taking an interesting concept, he has disturbed the flow with his meaningless direction which irritates the audience big time.

On the whole, Journey 2 is an outdated love story which does not work at all. Except for the novel storyline, the narration, characterizations, proceedings and climax are old school and have nothing to offer absolutely. Ignore this film this weekend and find something else better.