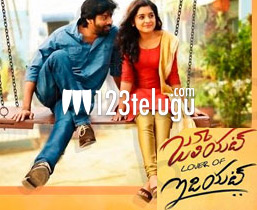 Juliet lover of Idiot is one film which has been in the making for the past two years. It has finally hit the screens today after clearing all its hurdles. Let’s see how it is.

Vara(Naveen Chandra) is a valet parking driver who falls in love with Julie(Nivetha Thomas). This is also the time when an important briefcase gets stuck in one of his customer’s car. Hell breaks out loose as that briefcase has all the important secrets belonging to a dreaded criminal called Khan(Abhimanyu Singh) who starts chasing Vara. How will Vara escape this chaos? and what happens to his love story? That forms the rest of the story.

This film is Nivetha Thomas’s debut film in Telugu which got delayed. She does a very good job in her role and depicts decent emotions throughout the film. Naveen Chandra is just about okay in his role of a carefree guy.

Ali gets an important role and he impresses as Gun Laden. The way he evokes comedy during crunch situations clicks well for the film. The first half has some good twists during the interval stage.

One of the biggest drawbacks of the film are the subplots. There are way too many stories running at a time distracting the concentration of the audience. When you think the crime thriller is on track, a stupid romantic scene or song suddenly jumps into the proceedings.

The second half gets way too much boring with the film going on and on with unnecessary tracks erupting one after the other. The mother angle showcased and the way it is connected to the story looks silly.

After dragging the film for so long, the climax is ended on an abrupt note. The villain angle is very weak and does not create any interest whatsoever.

As two years have gone by, the film looks outdated. The camerawork is shoddy and the production values are just about okay. Editing is horrible as at least 15 minutes could have been easily edited out. Music is below par and so was the entire set up. Coming to the director Ajay, he has done a disappointing job with the film. Had he only narrated the film with the crime angle, things would have been decent. But he adds so many subplots like the romantic angle and mother sentiment which takedown the film completely.

On the whole, Juliet Lover of Idiot is one outdated crime thriller which is dragged to no extent. Too many subplots, illogical narration, and unnecessary romantic scenes bore the audience to no extent. Except for Ali’s comedy here and there, this film ends up as a long and painful watch this weekend. Just stay away from this one.