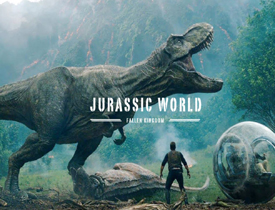 The much-awaited outing from the Jurassic world franchise, Fallen Kingdom is finally here. This action-packed entertainer raked up huge expectations as the teasers and trailers promised many adrenaline-pumping episodes that were meant to be savored on the big screens. Let us see whether the movie lived up to the humongous expectations laid on it.

The monumental Jurassic world which has been abandoned for 3 years is under the danger of extinction as a fatal volcanic eruption is on course to wipe out the entire dinosaur population on the island. It is up to the United States government to save the species, but the officials decide to let them die, saying that the mutual co-existence of dinosaurs and humans is far from sanity.

However, Owen(Chriss Pratt) and Claire(Bryce Dallas) try their best to save the dinosaur species with help from a private organization. These two have previously worked together when the Jurassic world was fully functional. But the problem they have to overcome here is much bigger when compared to the hurdles they faced a few years ago. Can they emerge victorious in saving an untamable and uncontrollable species? If yes, can dinosaurs share the world with modern-day humans? Watch the movie on big screens to know the answers.

The first half is filled with action episodes and keeps the audience on the edge of the seats with adrenaline-pumping episodes. The movie does not take much time to shift gears and enters the actual plot making the action entertainer an engaging affair right from the word go.

The emotional episodes between Owen and his hand raised velociraptor dinosaur, nicknamed blue, have come out really well. This emotional connection can offer a great deal of near-to-heart experience for viewers who have watched the previous Jurassic world movies.

The background score stands as a backbone for the movie as many action episodes reach new heights, thanks to the scintillating soundtrack that brings a near-to-life vibe to the film. The graphic works are outstanding and just prove the point that the Jurassic world franchise just keeps getting better with every passing movie.

The Indoraptor that was portrayed as a fierce and clever species is absolutely terrifying. Its appearance resembles a devil-like creature, adding that spine-chilling vibe when it is on screen.

After such an adrenaline pumping first half, it is normal for anyone to expect an even more jampacked second half, but director JA Bayona sticks to the emotional plot and that brings down the pace a bit. Scenes leading to the climax have been dragged, slightly slowing down the tempo.

The hyped-about aquamarine creature that featured in the trailer is just seen in the initial episodes of the movie. Surprisingly, the makers have opted not to bring this creature into the frame even when they had the chance in the latter parts of the first half.

The process of moving the dinosaurs from a deteriorating island looks a bit silly as we do not see the security personnel making any real effort to capture the dinosaurs.

The director, JA Bayona did an exceedingly good job in the first half as the action episodes go with the flow of the movie and do not look like they have been forced in. However, his narration in the second half is just about okay as he follows the age-old formula of humans creating an uncontrollable creature which is later defeated by the hero with help from another dinosaur.

The camera works are absolutely stunning and are on par with a typical outing from the acclaimed Jurassic World series. The vibrancy and greenery of the Costa Rican island(Jurassic World) have been captured well and that adds a lot of authenticity to the entire setup.

The movie looks more like a larger than life creation than a typical Hollywood entertainer, thanks to some stunning graphics and production design. The majority portion of the movie is set out in a dark theme offering a new experience to the viewers.

On the whole, Jurassic World-Fallen Kingdom is yet another action-packed outing from the world-renowned Jurassic World franchise. The film has a few ups and downs and the core plot offers nothing new. But the pacy narration, superb graphics, and emotional episodes make this film surely a worthy watch this weekend. Go watch it on the big screens to experience the terrifying presence of Indoraptor.