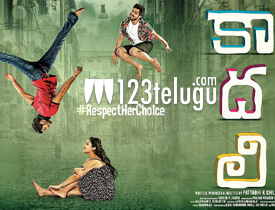 Kaadali is one film which has been promoted quite heavily in the recent past. Touted to be a triangular love story, the film has hit the screens all over today. Let’s see how it is.

The story of the film is about a middle-class girl called Bandhavi(Pooja) who is fed up with all her marriage alliances getting disrupted at the last minute. Left with no choice, she decides to find the man of her life herself.

In this process, she comes across two young guys played by Sai Ronak and Harish Kalyan and starts getting close to them. The twist in the tale arises when both the boys fall neck deep in love with her.

What will Bandhavi do now? Who will she pick as her life partner? That forms the rest of the story.

The basic story of dating two guys at a time looks quite contemporary and has also been handled decently in the first half. Both the young heroes are extremely handsome and play their parts convincingly till the end.

Sai Ronak suits the rich boy’s role perfectly and does well in his character which has some negative touch. But it is Harish Kalyan who gets a meaty role and the emotional touch in his character gives him an edge in the film. All his scenes with his mother have come out quite nicely.

The romantic scenes that have been executed with each of the hero featuring the heroine have also come out well. Some family emotions also work to an extent. Bhanu Avirineni, who does the doctor’s role is good with his comedy.

One of the biggest drawbacks of the film is it is painfully slow. The proceedings take their own sweet time to shape for the actual twist which is also very predictable. Even though the heroine looks good, too much of emphasis is on her character and a known face would have helped matters a lot.

The second half of the film goes down completely as many scenes keep repeating. All they show is a heroine’s quarrel with each hero and a heartbreak song. The romance is gone and heroine’s attitude and the way she is caught between the two is also showcased in a very boring and routine manner.

The climax of the film also looks outright silly as the major reason why the girl chooses a particular hero is not explained properly. The end is wrapped in a hurry as the heroine just chooses one of them and the scenes that showcases this have absolutely no depth.

Coming to the director Pattabhi, even though he chose a novel point, he disappointed in his execution. He narrated the first half in a decent way with some good scenes featuring the three main characters. But post the halftime, he did not have much to showcase and made the film wander here and there. There is also no proper justification shown as he diluted the heroine’s role and made her silly in the end.

On the whole, Kaadali has a contemporary story but is let down by some lazy execution. Some romantic moments here and there entertain the audience but the rest of the film is painfully slow. Both the heroes, Sai Ronak and Harish Kalyan look quite promising and should do well in the future. All those who like love stories can give this film a shot but they need to go in well prepared as the film takes it own sweet time to unfold.