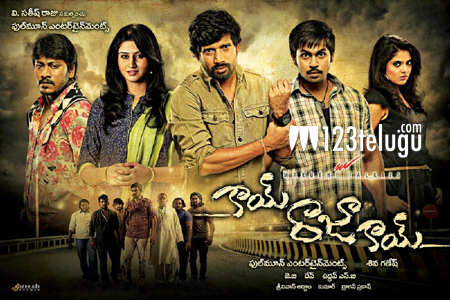 ​Director Maruthi has been associated with some interesting films in the past. After a brief gap, he is presenting the crime comedy Kai Raja Kai. Directed by Siva Ganesh, this film has hit the screens today. Let’s see how it is.

A dreaded gangster named Bhattu manages to rob a box of expensive gold biscuits. Twist in the tales arises when his assistants steal the box from him and place it in a car nearby a mechanic shop which is owned by Khanna(Ram Khanna).

On the other hand, Annad(Manas) and Josh Ravi(Chitti) are two unemployed youth who stay along with Khanna. Destiny strikes the gang as they come across the box and decide to sell it off and make money. Will they manage to accomplish the task ? How will they escape the evil Bhattu ? That forms the rest of the story.

Major plus point of the film is the comedy quotient. This film has enough adult comedy which will entertain the audience to an extent. Josh Ravi is the highlight of the film and does well in his comic role. All the scenes with his friends and gay comedy with Rocket Raghava in the second half is good.

Lead heroes Manas and Khanna suit their characters well. Talented actor Khanna, is very good as the guy who gets cheated and gives an emotional performance right throughout the film. He is the main stay of the film and generates superb chemistry with the other two friends. Heroines Shamili and Shravya look good and give decent support to the film.

Production values are good as the film has been showcased in a decent manner. Some situational comedy during the climax is good. Second half of the film gets interesting as a cat and mouse game becomes the main stay. The adult comedy which comes with Josh Ravi’s character will go down well with the masses.

The movie is 140 minutes long which is a bit lengthy for today’s standards. If the makers would have edited the film by at least fifteen minutes, the outcome would have been more effective. The villain’s role is a big let down in the film. There are many unnecessary scenes which showcase him and his evilness.

Like every other crime comedy, even this film becomes predictable after a point. You exactly know what is going to happen in the film. After an interesting half an hour in the first half, the film gets bogged down. The director uses up way too many scenes to showcase both the lead pair’s stories.

A romantic song breaks out of now where in the second half and spoils the flow of the film. Even though the climax of the film is ok, it has been dragged out unnecessarily.

Camerawork by Dev is pretty good and showcases the Hyderabad locales in a superb light. This young talent brings in a special weight to the film with his amazing visuals. Music by JB is pretty good especially the title song which has also been shot nicely. Dialogues are in typical Maruthi style and suit the mood of the film. Screenplay of the film is below par but is a lot better in the second half.

Director Shiva Ganesh does an ok job with this film. Even though he chooses a routine story, he balances it with the comedy quotient. The only place where he falters is with the usage of unwanted scenes throughout the film.

On the whole, Kai Raja Kai has some decent fun elements. Excellent comedy by Josh Ravi and an interesting premise are basic assets of the film. If you ignore the excessive length and some unwanted scenes in the first half, you might end up liking this routine crime comedy.