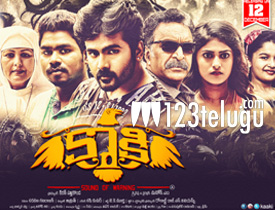 Continuing with the trend of horror flicks, yet another film which has hit the screens in this genre is Kaki. Let’s now see how this film turns out to be.

Karthik(Ashok) and Deepthi( Megha Sri) are NRI’s who settle down in the US. One fine day, they land in Vizag along with their friend Kiran(Kiran Pattikonda) to oversee their factory problems and make their old guest in the village as their base.

Busy with his other works, Karthik leaves to the city and Deepthi is left alone in the bungalow. Things take a U-turn when some evil forces start attacking Keerthi. These forces even enter the body the watchman’s daughter and start irritating Keerthi big time.

Who are these evil forces ? What do they have to do with Keerthi and her husband ? How does the couple come out of this tricky situation ? That forms the rest of the story.

Major plus points of the film is the opening scene, interval bang and climax. The proceedings kick star with a superb twist and is continued with some good suspense elements till the interval. The comedy scenes which come during this time has been executed well.

After a interesting interval point, the movie takes a serious turn and many twists are revealed during this time. Pre-climax part has also been designed well and the horror comedy which comes at this point is pretty good. Kiran, who has done the role of a friend is good in his character and evokes good comedy.

Performance by baby Yuvina is superb and gels with the film well. Ashok is pretty impressive in his performance and so were Megha Sri and Nassar. Jayasudha is pretty good in her cameo.

One of the biggest drawbacks of the film is the age old story line. A haunted bungalow, several characters entering the scene and a haunted ghost with a flash back, we have seen such stories many a times. Once the twists are revealed, the film gets quite predictable.

Post the interval bang, pace of the film gets bogged down as some unnecessary scenes take center stage. Too much time has been spent on the flashback episode. Logic goes missing in many scenes as the makers have taken too much liberty.

Camera work is pretty impressive and full marks should go to the cameraman for showcasing the film in different modes. Background score by Amrit is decent and elevates the film nicely.

Coming to the director Manon, he has done an okay job for his debut film. The way he has showcased a ordinary story with decent horror and thrilling elements speaks about his talent. Editing was below average as many scenes during the flash back could have been edited out.

On the whole, Kaki is a routine but ok thriller. Even though there is nothing much new in terms of story and performances, they way it has been narrated with some enjoyable elements makes it a passable watch for all the horror film lovers this weekend.