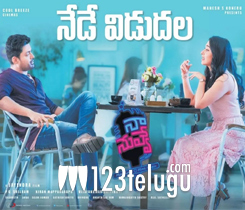 Kalyan Ram is trying his luck in a romantic role for the first time in his career with today’s release Naa Nuvve. Starring Tamannah as the female lead, this film is directed by Jayendra and has hit the screens today. Let’s see how it is.

Meera(Tamannah) is a happy go lucky girl who comes across a well-educated guy called Varun(Kalyan Ram). Destiny strikes as Meera and Varun cross paths very often. But when they both finally meet, Meera coveys her love towards Varun and says that destiny has played its part and that is the reason they are meeting time and again. But Varun, who does not believe in all this, puts Meera through a test and says that if the same destiny exists, they will surely meet again. What is the test? Will Meera get through it? and will the lead pair meet in the end? To know the answers, you need to watch the film on the big screen.

Tamannah is the major plus point of the film. She has a very strong author-backed role and does complete justice to it. She looks beautiful and has been showcased well in her character. Kalyan Ram gets a decent makeover and is good as the subdued lover. If showcased well, he can easily carry romantic and family films with ease.

The first fifteen minutes of the film are interesting as scenes showcasing the couple meeting time and again have been executed well. Tanikella Bharani is good as heroine’s father and makes things look decent in the second half.

Posani evokes a few laughs here and there and same is the case with Vennela Kishore too. The background score of the film is very impressive and lifts the film in a certain romantic scenes.

Naa Nuvve received a very good buzz majorly because of the hit songs. But sadly, none of the songs have been placed well. Rom-coms need good songs at regular intervals and the director in spite of having a hit album, spoils things with his uneven placement. Perfect placement would have helped the film in a good way.

Production values by Mahesh Koneru and his team are top class. The film has a decent effect as P C Sreeram shows the love story in an endearing tone through some well-lit visuals. Music by Sharath is very good but sadly, his songs are wasted in the narrative. Dialogues are neat and so was the production design. The good part is that the film is only two hours long which makes things easy a bit.

Coming to the director Jayendra, he has done a below average job with the film. His narration lacks the focus in many areas and he does not allow the love story to blossom at all. Just when you think, things will get interesting between the lead pair, some abrupt scenes relating to destiny spoil the flow of the film completely.

On the whole, Naa Nuvve is a routine romantic drama which gets distracted by some wayward execution. Things could have been good but lack of grip in the narration makes things outdated. However, the positive outcomes of the film is Kalyan Ram’s decent makeover and Tamannah’s screen presence which makes things interesting at times. If you are the one who likes love stories and is okay with the slow pace of the film, you can give this movie a shot. But for the rest, things can get quite tedious.