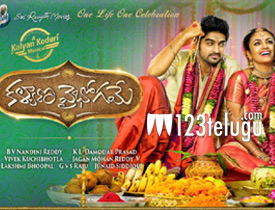 Talented director Nandini Reddy, is back after a huge gap with an emotional family drama Kalyana Vaibhogame. The film which has Naga Shourya and Malavika Nair as the lead pair has hit the screens today. Let’s see whether the film lives up to all its hype or not.

Shourya(Naga Shourya) is a handsome looking gaming expert who does not want to get into the mundane responsibilities of marriage. Same is the case with Divya(Malavika Nair) who is a doctor. Destiny has different plans as both their parents fix their marriage together.

Upset with this, both Divya and Shourya confront each other and make a plan to avoid the wedding. What is that plan ? How will they execute it ? and will they get close to each other during this time ? That forms the rest of the story.

Kalyana Vaibhogame has beautiful family emotions. Credit should go to Nandini Reddy for showcasing them in such a rich manner. Today’s relationships, the mindset, and the way society is progressing have been showcased in a splendid way. The film is showcased in a clean and simple manner and this will click with the family audience big time.

Naga Shourya looks handsome and carries his role supremely well. His chemistry with Malavika Nair is very good and the unique couple are perfectly cast in this modern day family drama. Malavika Nair is also good in her role and portrays beautiful emotions during the second half.

After a long gap, Raasi makes a good comeback and is very elegant as the heroine’s mother. Second half of the film has some meaningful emotions. The way the unique love story progresses has also been showcased nicely. Kalyan Koduri’s music is yet another biggest asset for the film.

Being a simple story, the film is a bit too long. Nandini Reddy takes too much time to wrap up the proceedings. The reason that triggers the love story and also the solid reason for Shourya to avoid his marriage have not been showcased convincingly.

Even though the songs are very good, they come at regular intervals in the film and add to the run time. The confusion climax and Tagubothu Ramesh’s entry remind you of Ala Modalinidi days. At least ten minutes can be easily edited out. Shourya falling for another girl and the way that episode ends lacks clarity and depth.

As said earlier, music of the film is superb and every song has also been shot supremely well. Dialogues are meaningful and so was the art direction. Production values are top notch and the beautiful camera work by Satyanarayana Raju only adds to the grandeur of the film.

Coming to the director Nandini Reddy, she has done a beautiful job with the film. The way she has narrated certain emotions and showcased subtle family values without any melodrama is just wonderful. She sticks to the task and does not include any unnecessary threads in the film. Had she decreased the run time, the output would have been top notch.

On the whole, Kalyana Vaibhogame is a decent and well made family entertainer. Beautiful emotions, lead pair’s performance and good family bonding are basic assets. If you manage to sit through the lengthy run time and go with the mood of the film, you swill surely end up liking this emotional and contemporary family drama.