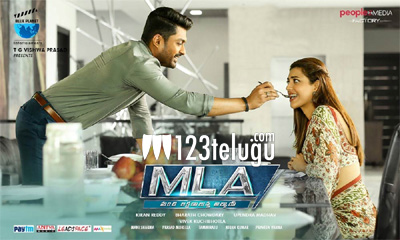 Out of the two films, Kalyan Ram is doing, a typical commercial entertainer called MLA has hit the screens today. Let’s see how it is.

Kalyan(Kalyan Ram) is a happy go lucky youth who falls in love with Indu(Kajal). He proposes to her but Indu rejects him and sets off to her village. Kalyan follows her and requests Indu’s family for her hand. This is the time when Indu’s dad(Jaya Prakash Reddy) throws a challenge at Kalyan and asks him to become an MLA and then marry his daughter. Why did Indu’s dad ask Kalyan to become an MLA? Will Kalyan take up the challenge? and how does he become an MLA is the whole story of the film.

Kalyan Ram is perfect in the central character of MLA. He looks quite handsome and fit in his new look and carries his role sincerely. Kalyan Ram has improved a lot with his performance and mouth all the mass dialogues with ease. All his confrontation scenes with Ravi Kishen have been executed well.

Kajal looks lovely as always and the whole story revolves around her. Performance wise, she has nothing much to do but Kajal does her best in whatever she gets. Posani generates a few laughs here and there.

The interval bang has been highlighted quite well and ends the first half on an interesting note. Certain emotions regarding the kids in the second half have been executed well.

MLA is yet another routine commercial drama which has nothing new to offer. The same old storyline, hero challenging the villain and helping the village people have been showcased in many films to date.

The story of the film only kick starts during the interval point and till then the proceedings that are showcased are just below average. The way Kalyan Ram and his gang cheat Ajay looks a bit silly. More romance should have been added between Kajal and Kalyan Ram to make things better.

Production values of the film are pretty decent as the village set up and mass elements have been showcased well. Mani Sharma’s music is good as all the songs have been also shot well. The camerawork is top notch and so was the background score which elevated the mass scenes quite well. Editing is decent and so was the production design.

Coming to the director Upendra, he has done just an okay job with the film. He chooses a simple story and narrates it in a okayish manner. The only problem with his direction is that he has showcased the same old stuff which we have seen in many movies. The difference here being the energetic performance of Kalyan Ram.

On the whole, MLA is a routine commercial entertainer with some good moments here and there. The confrontation scenes between Kalyan Ram and Ravi Kishan and some decent emotions are major assets. There is nothing new that this film showcases and all those who do not mind this factor and want to watch a typical mass masala movie, this film is for them. Others can look out for better options.