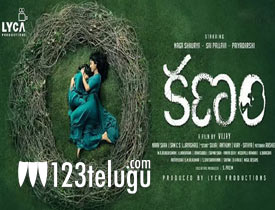 Kanam is one film which has been waiting for its release date for quite some time now. The film has finally found its way to the theatres today and let’s see how the film turns out to be.

Sai Pallavi and Naga Shourya are a couple who abort their child as they are very young in age and also yet to tie the knot. After being separated for five years, they finally tie the knot. But Sai Pallavi does not forget the trauma she went through and always remembers the fact she would have had a five-year-old daughter by now if she did not get her abortion done. The twist in the tale arises when a small five-year-old spirit called Diya enters their life and turns things upside down. Who is this girl? What does she have to do with the couple? and what happens in course of time. That forms the rest of the story.

The concept of the film is pretty good. The manner in which the revenge story is weaved around a five-year-old kid looks quite naive. The little girl who played a key role was the best in the film as her expressions and the manner in which she showcased the pain was quite good.

Naga Shourya was apt in his crucial role. He had a major character and no wonder why he did not promote the film. All his scenes with Sai Pallavi have come out quite well. The manner in which all the murders have been showcase looks quite cool

The emotions in the film work only to an extent as there is not much depth in the proceedings during the second half. Naga Shourya’s role should have been given a proper ending.

Even though the thrills are good, they do not create a lasting impact on the audience. Priyadarshi’s role of a cop is outright silly as he hams to no extent to look funny.

The film has a Tamil flavour which is clearly visible through the supporting cast and surroundings. Camera work is outstanding as it showcases the simple set up in a very good manner. But the background score takes away the cake as it elevates the film to a decent level. Production values of the film are decent and so was the editing which was quite crisp.

Coming to the director AL Vijay, he has done an okay job with the film. His concept is good and he starts off the proceedings on an interesting note. But his narration through the second half does not hold much interest as he fails to elevate the key emotions and thrills making the film look quite simple and nothing great.

On the whole, Kanam is an emotional thriller which does not thrill you to a great extent or disappoints you completely. Interesting thrills during the first half and crisp runtime are major assets. But the film falters during the later part as major emotions are not dealt well. As the film runs on Sai Pallavi’s star power, her role is just about okay. All those who are tired of the routine commercial flicks and want to watch an emotional thriller, they can try out this film which ends up as a one time watch this weekend.