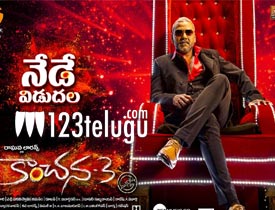 Kanchana 3, the third part of the successful horror comedy franchise Kanchana, is carrying decent expectations among the public. Directed by choreographer turned filmmaker Lawrence, the film is out today. Let’s see wheater it lives up to its expectations or not.

Like earlier parts, Kanchana3 also deals with the story of a man called Kaali(Lawrence) and his girlfriend Lucy. As Kaali refuses to join hands with a corrupt politician called Shankar, he and his girlfriend are murdered mercilessly. Rest of the story how Kaali takes revenge on Shankar by getting into the body of Raghava(Lawrence).

The film is completely Lawrence’s show as he carries the film on his shoulders by doing two roles superbly. His transformation scenes from Raghava to Kaali have come out well and Lawrence’s performance in these scenes was superb.

A few horror comedy elements in the first half of the film will evoke good laughs in the auditorium. A special mention about Kovai Sarala, Sriman and Devadarshini as their comedy track during the interval block was hilarious. Three girls Vedhika, Oviya and Nikki Tamboli have provided enough glamour show in their limited screen presence.

Though Lawrence’s fresh idea in this sequel is decent, it was somewhere messed up in the proceedings. After an okay first half with nice horror and comedy elements, the narration in the latter half lacks a racy screenplay.

The flashback episode of Kaali is good but it is too lengthy. The emotional connect was also not showcased impactfully during the course of time. Most importantly, after the flashback is done, things are hurried up during the climax as the film is wrapped up without any engaging drama.

Director Lawrence is good as an actor and choreographer but misses the target slightly when it comes to direction. His execution part is not so impressive and has many unnecessary scenes. If he would have written a better screenplay by keeping all the hype surrounded in mind, the result would have been much better.

Editing work is adequate as close to twenty minutes of the film can be chopped off easily. Cinematography is decent as the night effects are captured nicely. Music by Thaman is unbearable as none of the songs register. But his background score in impressive. Production values for this limited budget film are good.

On the whole, Kanchana3 is a typical horror comedy which has a few good horror elements in the first half. However, the second half goes down with a lengthy flashback episode and hurried climax. The film will find a mixed response from the A centers but as it is clearly aimed at the masses, they will like the film and will enjoy it as a package.