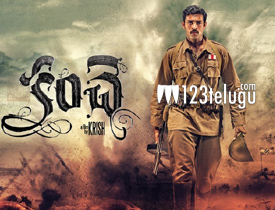 Kanche is probably one of the most eagerly awaited films in Tollywood. Directed by the highly talented Krish, this film has Varun Tej and Pragya Jaiswal in lead roles and has hit the screens today. Let’s see how the film turns out to be.

Kanche is set during the tragic times of world war II when nearly two lakh Indian soldiers fought the biggest war in history. The film depicts the story of Hari Babu(Varun Tej) who falls in love with Sita Devi, a rich princes(Pragya Jaiswal) from the upper caste.

Twist in the tale arises when their love is strongly opposed by Sita’s brother Eeshwar(Niketan Dheer). What will Hari Babu do now ? How will he solve his problems ? and how does he land himself in the prestigious war of all time ?

To know answers to these questions, you need to watch Kanche on the big screen.

One needs to credit director Krish for thinking something different and setting a Telugu film amidst the world war II. Varun Tej is amazing as Hari Babu and makes a stunning transformation from his debut film. The way he carries the entire film is pretty impressive. All those who had doubts about his acting capabilities need to watch Kanche to believe it. Varun looks dashing as the aggressive solider and at the same time is sober and lovable during the flash back episodes.

Kanche will be a turning point in Pragya’s film career. She looks stunning and should thank Krish for her big break. Pragya has amazing screen presence and is a star to watch out for. Niketan Dheer makes an impressive debut and suits his role perfectly. All his scenes with Varun have been designed well.

Visuals are top notch and credit should go to the camera department for depicting the war scenes in such a realistic manner. It is nice to see veteran actor Gollapudi in a key role. Srinivas Avasarla has been showcased humorously and he too, does a wonderful job. First half of the film is quite gripping with some interesting war and romantic scenes.

Kanche is one film which does not have any commercial angle. It is purely a film with single point agenda and flows on a very serious note. All those who are expecting pop corn entertainment or masala action will be disappointed big time. There are certain logics regarding the war front which go missing.

The story gets predictable and narration gets slow during the second half. After a point, the proceedings of war front and the way Hari Babu goes about his mission lacks the required intensity.

The high voltage emotions which are generally associated with Krish’s films are certainly missing in Kanche. There are no such particular moments in the film which are awe inspiring or make you feel ecstatic.

As said earlier, Kanche has some top notch visuals. The flavor in the war scenes is of international standards. Credit should go to art director Sahi Suresh for depicting the film in a realistic way. The way he has lit up the sets, created weapons or transformed the village back in time, everything looks superb.

Editing is decent and so is the music. Background score needs a special mention as it elevates the film to a decent level. Dialogues and lyrics are top class and have been written with a lot of depth.

Coming to the director Krish, he has done a decent job and nicely sets the film in the war backdrop. His screenplay is impressive but he falters in evoking much intensity from the war zone part and slows the film down during the second half.

Tollywood has become an industry which is no longer associated with only commercial entertainers. Films like Baahubali, Rudrama Devi and now Kanche, have pushed the boundaries beyond everyone’s expectations. Krish should be truly appreciated for attempting a film which takes Telugu films to another level. A realistic back drop, gripping visuals and stunning performance by Varun Tej are major assets. Barring the slow narration, Kanche is a film which is devoid of masala entertainment and should be given a shot for its daring and different attempt.