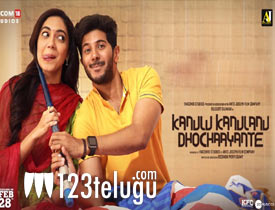 Kanulu Kanulu Dochayante is a film that has not been promoted much. Starring Dulquer Salman and Ritu Varma, this film has hit the screens today. Let’s see how it is.

Siddharth(Dulquer) and his friend are two engineers who take the wrong route in life and start making easy money. As time passes by, Sid falls in love with Meera(Ritu Varma), who is an orphan. After a point of time, he decides to settle down to life and heads to Goa with Meera and his friends. But sid gets the shock of his life when cops attack his cottage. Here, a crazy twist is revealed in the film. What is that and how are all the characters connected forms the rest of the story.

Dulquer Salman is super handsome as the conman and does an amazing job in his role. He makes use of his charm in a superb manner and that helps the film in a big way. Dulquer has dubbed in his own voice and it suits the nature of the film. All his scenes with Ritu Varma are quite good.

Ritu Varma is the surprise package as her role comes as a shocker for the audience. She is cute and at the same time showcases her bold side in the film. Her chemistry with Dulquer is top notch and they look good as a couple. The suspense elements in the film are quite good as all the thrills have been executed well.

Star director, Gautham Menon plays a cop and his performance is top notch. He is stylish and brings a good depth to the film. The way his role is ended with Ye Maya Chesyave connections is hilairous. Anish Kurvilla gets a good role in the secong half and does well as a rich businessman. Rakshan, who plays Kallis in the film evoked good comedy.

The whole money robbery process and how scams are doing using technology has been showcased in a gripping manner. The interval twist is the highlight and is a big shocker. The background score by Harshvardhan and Rameshwar is top notch.

The first te minutes of film are quite dull as the love story has nothing much interesting. The film takes a lot of time to enter the actual story. The songs of the film are weak and disturb the proceeidngs a bit. All those who think it is a love story will be mistaken

When compared to the first half, the second half is a slightly dull. The cop investigation takes a back seat in the film as Dulquer and his gang easily manage a big robbery without any obstruction. This looks a bit odd.

The production values of the film are top notch as Goa, Delhi and its sorrounding areas have been showcased superbly by the camerawork. Music is below par. Art direction is top notch and so was the whole production design showcasing the technology.. The Telugu dubbing especially, Aziz Nasser’s dubbing for Gautham Menon is top notch. Dialogues are pretty good.

Coming to the director Periyasamy, he has done a good job with the film. The way he has written a crime story by using latest technology is pretty good. He adds many thrilling moments in both the halves and keeps the film enagaging. It is the climax and some over the top scenes which lack the logic slow the film down here and there.

One the whole, Kanulu Kanulu Dochyante has a very interesting premise with some well executed thrills. Dulquer Salman and Ritu Varma’s surprising act, interval twist and robbery scenes in the second half are basic assets. Except for a dull start and some some illogical moments, this film ends as a engaging watch for crime thriller lovers and a passbale watch for others.