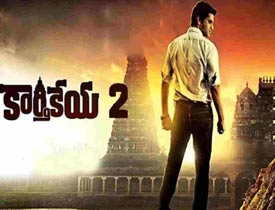 Karthikeya 2 has been in the making for the last few years. After a huge round of promotions, the film has hit the screens today. Let’s see how it is.

The film starts with lord Krishna forecasting the future and penning all the solutions to the problems in a special Kankanam. Cut to present, Karthikeya(Nikhil) is a doctor who goes to Dwaraka along with his mother. There, he gets embroiled in a mystery which is related to the special Kankanam. What is this special mystery ? How did Karthikeya solve it? Where does Anupama Parameswaran feature in this setup? To know the answers, you need to watch the film on the big screen.

Nikhil and Chandoo Mondeti are a hit pair and they have done it once again with Karthikeya 2. Kudos to director Chandoo Mondeti for penning an intriguing thriller and connecting the past and present worlds quite well. His writing is fine and gives the audience moments filled with thrills and suspense.

It has been quite some time since we have seen Nikhil on screen and he makes it for the gap with a solid performance. He has matured a lot with his acting and is quite settled in his approach towards his character. He has a very key role and has to convince the audience what we are seeing is actually true and not fiction. In this department Nikhil scores full marks.

The surprise package of the film is Kaala Bhairava and his stunning music score. He shocks the audience with spell binding BGM which elevates the film to another level altogether. Even the ordinary scenes create interest for the audience with the enchanting BGM.

Not only does the film have thrills but the director added fun through the roles of Srinivasa Reddy and Viva Harsha who are solid in their roles and evoke good fun. Anupama Parameswaran gets a good role and she is neat in her given part. Anupam Kher gets a small but impactful role and shines.

What makes Karthikeya 2 interesting is the intriguing factor as to what will happen next. The quest to find the truth holds the attention of the audience. The director does not deviate from the main theme and keeps the audience engaged for the most part.

Though all the links are ended properly, there is a bit of confusion in the beginning of the film. The whole concept of lord Krishna and how the present generation is after a special Kankanam is not well established. Probably, the director should have added a character or a few scenes to make the audience understand what the actual plot is all about.

The pace in the second half goes down a bit as the director fails to elevate the villain’s angle properly. The plot goes through various stages and this journey could have been narrated in an even easier manner to make the common people understand.

The production values of the film are top notch and special mention to the cameraman Karthik. His visuals and color tone used for the adventure scenes is very good. The editing part is also impressive as the scenes do not have much lag.

The dialogues are pretty good and the ones used for Anupam Kher are amazing. The production design is rich and the VFX used is quite realistic. The costume design, props used and the locations chosen are quite good.

Coming to the director Chandoo Mondeti, he has done a very good job with the film. One can say that Karthikeya 2 is his best film to date. He takes a plot with a backdrop of mythology and setting it up in the present day world was not easy. Not only has he done that well but he made sure the film has comedy, thrill, and suspense in equal proportions. His screenplay is good but the usage of a few sub plots and their connections in the end should have been more clear from the beginning.

On the whole, Karthikeya 2 is a well made adventure thriller filled with great visuals and engaging narration. The backdrop, BGM, and performances create an intriguing factor. Baring a confusing first few minutes, this film makes up for an enjoyable watch and will be lapped by the audience this long weekend. Go for it.