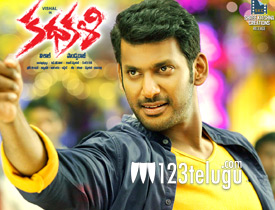 Tamil hero Vishal, is one actor who is doing films back to back. He is now ready with his latest film ‘Kathakali’ which has released today. Let’s see how it is.

Kamal(Vishal) is a US based software engineer who heads back to his native village to marry his sweetheart Malleswari(Catherine Tresa). During the same time, one of the famous persons in his village, Samba(Madhusudhana Rao) gets murdered all of a sudden.

The cops suspect Kamal as both his and Samaba’s families have some age old rivalry. Situation gets worse and Kamal ends up into all sorts of problems. Who killed Samba ? What is his rivalry with Kamal’s family ? and how does Kamal solve all his problems ? That forms the rest of the story.

One of the biggest asset of the film is the suspense element that has been maintained right till the very end. Screenplay of the film is also impressive as a simple point is executed for close to two hours in a decent manner.

The way revenge has been showcased with two different angles is also impressive. Some family emotions showcased during the second half are very good and make the proceedings a bit racy.

Vishal is pretty impressive in his tailor made role and does not exceed his limitations. Catherine Tresa looks beautiful and provides ample support to Vishal. Madhusudhana Rao, who plays the bad guy is also very impressive.

Story of the film is quite simple and does not have anything new to showcase. Even though the suspense element is good, there are no major twists that will shock or excite you. Love track between the lead pair looks jaded and has not been handled well.

Songs in the first half are a major hindrance and especially Vishal’s intro song was unnecessary. Climax fight looks totally unwanted and logic in certain twists goes for a toss and makes the proceedings look below par.

As said earlier, screenplay is a huge asset as the proceedings are showcased in a simple manner. Background score composed by Hip Hop Thamiza is quite good and elevates the film to another level. Production values by Vishal and his company are pretty good when compared to his previous films. Coming to the director Pandiaraj, he has done a okay job with the film and does not deviate from the point much.

On the whole, Kathakali is a passable murder mystery interlinked with good family emotions. The simple suspense element and single point agenda of the film makes things watchable. If you ignore the lack luster love story and keep your expectations in check, you can give this film a shot if you have nothing else to do.