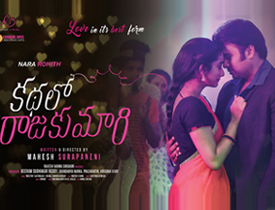 Nara Rohit’s latest offering, Kathalo Rajakumari has attracted the audience with its first look posters and trailer. Directed by debutante Mahesh Surapaneni, this film has hit the screens today. Let’s see how it is.

Arjun(Nara Rohit) is an arrogant film star who leads his life by degrading his fellow staff all the time. When everything seems to be going fine, a major car accident completely changes his mindset and perception towards his staff.

To bounce back to his original bad character and make things move smoothly, Arjun takes a break and lands in his childhood village. Why did Arjun go to his village? How will he get back to his original character? and How is the heroine Namitha Pramod interlinked to the story? To know all this, you have to watch the film on the silver screen.

Nara Rohit gives a good performance as an arrogant film actor and a painful lover. He showed good variation in both the roles. Looks wise, heroine Namitha Pramod is good and does well as a village girl. Young hero Naga Shourya is good in his cameo.

Prabhas Seenu’s comedy timing is good and his spontaneous punches will evoke few laughs here and there. Actor Ajay is okay in his role as a close associate to Rohit. The interval point is interesting and raises good curiosity for the second half.

Director Mahesh Surapaneni’s concept is okay but his execution will surely disappoint the audience. After an okay first half, things get complicated in the second half as the film’s narration goes on a very slow pace.

After a point, the film gets predictable and literally tests the patience of the audience with its boring narration. The hero’s mission of entering his village to change his character does not convince the audience at all. The pre-climax and climax sequences are routine and showcase nothing new.

Looks like debutant director Mahesh Surapaneni has focused more on dialogues rather than the narration of the film. His idea is good but the execution gets completely sidetracked with some boring and routine proceedings.

Editing work by Karthik Srinivas is just about okay. Cinematography by Naresh K Nara is good as he captured the natural Araku locations well. Music by Maestro Ilayaraja for two songs is good. Another music composer, Vishal Chandershekar did a decent job with his background score. Production Values are okay for this limited budget film.

On the whole, Kathalo Rajakumari is yet another disappointing outing from Nara Rohit. Though the first half is okay with some passable moments, the second half completely disappoints the audience with its boring and slow paced narration. All those who like different love stories can give this film a shot and the rest can stay away.