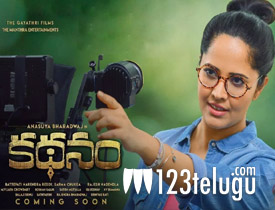 Jabardasth lady Anasuya has come up with yet another women-centric film, titled, Kathanam. Directed by Rajesh Nadendla, the film is out for public viewing today. Let’s check whether it managed to impress or not.

Anu(Anusya), an aspiring film director pens a script as per the requirement of her producers. But to her shock, the characters mentioned in the script start dying in a mysterious manner. To find out the story behind these mysterious murders, Anu seeks the help of ACP Randhir(Randhir). In his investigation, Randhir finds out some unbelievable facts about the case. What are those facts? How is Anu cornered in this whole setup? To know this, you have to catch the film in the theaters near you.

Anasuya carries the film completely on her shoulders. She had two shades to portray and Anasuya performed her role convincingly. Her appearance as a modern lady is nice but the way she pulled off a traditional role in the second half is equally good.

The interval block is engaging and the suspense factor is handled well during this time. Star comedian, Vennela Kishore tried his best to evoke good laughs with his typical one-liners in the first half. Yet another comedian, Dhanraj gets a lengthy role in which he did a decent job. After a long time, actor Randhir gets a meaty role and he did an impressive job.

Though the suspense factor is handled well, the narration of other scenes lacks a proper punch in it. The flashback episode which is a backbone for the movie could have been executed in a more effective manner.

As the film is a serious mystery drama, those who expect regular commercial elements like Anasuya’s glamor and songs may get disappointed. Once the suspense is revealed, the proceedings look predictable with old school narration.

The antagonist gang’s activities are not been showcased in a convincing way. Talented actor Srinivas Avasarala has not been utilized in a proper manner.

Director Rajesh Nadendla succeeded to an extent in writing a good screenplay which has a few thrills. But his story is a regular revenge drama. A few social dialogues which come in the second half of the film are written nicely.

Editing by SB Uddhav and cinematography by Satish Mutyala are decent. Music by Sunil Kashyap is nice as his background score for crucial scenes in engaging. Production values for this limited budget film are good.

On the whole, Kathanam is a mysterious revenge drama which does not have much going it’s way. The suspense is decent and Anusuya carries the film on her shoulders. But that is not enough as once the twist is revealed in the second half, the narration becomes predictable making the film a below-par watch this weekend. Watch it only for Anasuya.