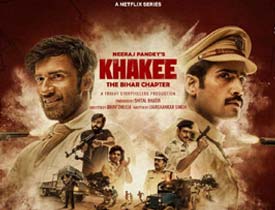 Netflix has been trying its best to give good content to its Indian users, and in this regard, they have now released a new series titled Khakee: The Bihar Chapter. The series got a decent buzz as famous writer-director Neeraj Pandey is the creator. The series is currently streaming on the OTT platform, and let’s see how it is.

The plot is based on the book “Bihar Diaries: The True Story of How Bihar’s Most Dangerous Criminal Was Caught” written by Amit Lodha. The series opens with how politics and criminal activities go hand in hand in the state of Bihar. Then we are given the introduction of the IPS officer Amit Lodha played by Karan Tacker. Amit Lodha slowly develops in his career. At the same time, Chandan Mahto (Avinash Tiwary), who started as a nobody doing small chores, becomes a powerful criminal posing a significant threat to the public. The rest of the story is about how the police department captured Chandan Mahto.

The entire setup of the series is nicely done, and we are taken into the Bihari world pretty well. The production design created very well reflects the atmosphere of Bihar state between 2000-2006, and all the artists got the Bihari slang right. The opening scene indicates how the criminals used to get support from the politicians in the state and intrigues one.

The show becomes interesting towards the end, and the last episode particularly has good depth. It talks about the loopholes in the judicial system and how criminals use these flaws to get away from their crimes. In the end, a small mind game runs between the protagonist and the antagonist using technology existing then, which is interesting.

Avinash Tiwary was fantastic as Chandhan Mahto, the one who shook the entire state of Bihar. The actor just lived in the role and did complete justice to the show. His body language, dialogue delivery, and looks were apt. Karan Tacker gave a fine performance in the role of IPS, whose role gets more weightage as the show progresses. Abhimanyu Singh, Ashutosh Rana, Ravi Kishan, and all the other supporting cast were solid in their given roles.

When we have a filmmaker like Neeraj Pandey, associated with the show, the expectations would be high, but the show didn’t live up to them completely. Though there are a few exciting moments, they are few and far between, and hence the show is bland and runs flat most of the time.

The show becomes entirely predictable without many twists and turns. Though the series is inspired by the book, the makers should have added more interesting elements to make it more engaging, reducing the monotony factor. The police investigation angle, too, lacks any novelty adding to the boring factor. Despite getting so close to the criminal, the police fail to catch hold of him, and the way things are executed here looks silly.

The length is another aspect that brings down the show. Gripping and fast-paced narration is a must for a show of this kind, but sadly the makers stick to the formula-driven screenplay. The VFX works are shoddy, and hence the action episodes look unconvincing.

The Humra Bihar title track was pleasingly composed by Advait Nemlekar, and the BGM in the series is too good. The cinematography by Hari Nair is solid, and he successfully captured the rustic Bihar state. The production values are okay. However, the editing team should have trimmed the lengthy sequences to make the proceedings interesting.

Coming to the director, Bhav Dulia, he did just an okay job with the series. Though the show had more scope, the writing team didn’t come up with an exciting narration making the show a regular crime drama. Hence solid performances from the lead cast don’t create an impact on the whole.

On the whole, Khakee: The Bihar Chapter is a passable show with a few good moments. The performances and the way the world of Bihar was shown excite one, but the straightforward narration and the lengthy runtime play the spoilsport. You can still give it a try, but there isn’t anything new that is showcased in the series.