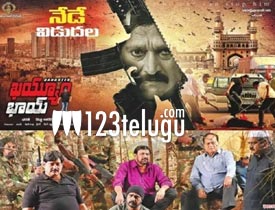 Khayyum Bhai is yet another low budget film which has released today. Based on the life story of the dreaded gangster Nayeem, let’s see how this film turns out to be.

Khayum(Ram Babu), who grows up with criminal thoughts and wicked mindset, joins the people’s war gang in his teenage. After a point of time, Khayum develops ego clashes with his gang and becomes a police informer. He develops a strong base and starts doing land settlements and extraditions by using his cop background.

Fed up with his activities, authorities finally encounters him with a perfect plan. What kinds of illegal activities did Khayum do? How did he run his empire? To know all this, you need to watch the film in theaters.

The basic plus point for this film is the curiosity factor which has been maintained until the end. The audience eagerly waits to see how will Nayeem’s story unfold on the screen. Tarakaratna does well in his role.

The way certain crimes have been inspired to write film scenes is quite interesting. Ram Babu, who plays the dreaded don has some features which make him look like Nayeem and this makes things better at times.

Except for some crime episodes, rest of the details shown are quite boring and even get irritating after a point. Nayeem’s growth as a gangster and how he used the cops to build his empire, all these things shown are unrealistic and too filmy.

Even the crime scenes shown are well known to all of us and have been showcased in an even better way by some of the television channels after Nayeem’s encounter.

Things get boring as even after half an hour into the film, Nayeem’s character is not introduced and this is quite disappointing. Tarakaratna’s romantic track is hugely boring and could have been made crisp.

Director Bharath has chosen an interesting point based on real incidents but he totally took a side track in execution. He could have taken enough time and gathered more information by working on it at a ground level. Music by Shekar Chandra is totally disappointing. Camera work is not up to the mark as the quality of the film is very poor and dull. Production values are below par. Editing work is weak as unnecessary scenes which come in the second half can be easily chopped off.

On the whole, Kayum Bhai has nothing interesting to offer and fails big time. Everything that is shown in the film has been re-created on TV in an even better manner. So, all those who are excited to see this film because of Nayeem’s name can go watch those clippings from various news channels as they are far more interesting than this film itself.