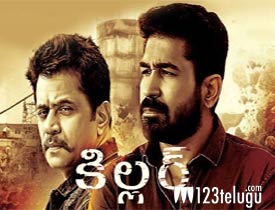 Vijay Anthony is back with another film of his titled Killer. Also starring action king Arjun, this film has hit the screens today. Let’s see how it is.

The film is based on a gritty murder which happens in an apartment. The cops start their investigation and to deal this case, a senior cop, Karthikeya(Arjun) is handed over the responsibility. In his investigation he comes to know that a mother and daughter played by Sita and Ashima are involved in the murder. But as the investigation thickens, things are revealed that a neighbor named Prabhakar(Vijay Anthony) is also involved. Now, why is he involved? What is the case? and What has Prabhakar go to do with the ladies forms the rest of the story.

The screenplay of the film is the biggest asset. Even though it is a straight forward murder mystery, the manner in which the twists are narrated is pretty good. The proceedings are made in such a way that the audience keep guessing the suspense till the last minute.

Killer becomes effective because of the superlative performance by Arjun. He as the clever cop has done a good job. All his investigation scenes are top notch and Arjun brings a lot of depth to the film with his screen presence.

Vijay Anthony was decent in his subdued role in the film. Heroine Ashima did well along with senior actress Sita. The interval bang showcased is a good twist in the film. The pre-climax episodes and the conversations between Nasser and Arjun give an edge to this crime thriller,

One of the biggest minus points of the film is the presence of two songs in the first half. Right when you think, the film is moving ahead nicely, the songs come in a speed breakers. Also, the film gets slow in the pre-interval scenes as the suspense is dragged unnecessarily. There is absolutely no entertainment and all those who look in that aspect will be disappointed.

Production values of the film are top notch. Special mention should go to the camerawork as the drone shots are very good in the film. Telugu dubbing done by Hema Chandra for Vijay Anthony was quite good. Background score of the film was quite gripping in the second half. The film is made on a crisp budget but looks rich.

Coming to the director Andrew Louis, he has done a decent job with the film. He does not experiment much and has written a gripping screenplay. There are not many major twists in the film but the manner in which he holds the suspense was good. If he would have made the first half a tad better, things would have been even good.

On the whole, Killer is a simple crime thriller which has some good moments in both the halves. Arjun’s performance and good investigation scenes are a plus. The film has not many great twists or turns but the manner in which a simple suspense is carried on till the end with neat screenplay makes this film a decent watch this weekend. Watch it without any expectations and you may end up liking it.