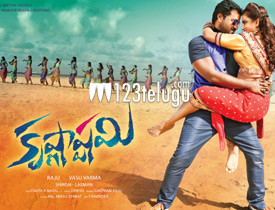 Talented hero Sunil, has been lying low from the past two years. Loosing no hope, he is back with a family entertainer Krishnashtami which has hit the screens today. Let’s see whether Sunil gets his much needed break.

Krishna(Sunil) is an NRI who always dreams of settling back in India. Whenever he plans a trip to India, something goes wrong and he is asked to stay back by his family. After a point of time, an upset Krishna decides to leave for India without the consent of his family.

As soon as he lands in India, he gets attacked by an unknown group and meticulously escapes the scare. During this time, Krishna also gets stuck in a tricky situation and lands up in a typical Rayalaseema family. Upon his arrival to their house, he gets attacked yet again and survives it too.

To his shock, he finds out that the entire family is after his life. What will Krishna do now ? Why is he being targeted ? How will he manage this dreaded family ? and where do Nikki Garlani and Dimple Chopade feature in all this set up? To know the answers, you need to watch the film in the theaters.

Sunil has tried to do his best and is as always good with his dances. Nikki Garlani makes a decent Tollywood debut and does well in whatever role she is offered. The last half an hour during the first half is very interesting and has some good moments.

A particular chase scene has been executed in a superb way and elevates the film to a decent level. Interval bang and the way suspense is revealed during this time is also good. Viva Harsha is good in his role and so were Ashutosh Rana and Mukesh Rishi.

One of the biggest drawbacks of the film is Sunil’s character. The way the makers have made it look quite subdued is disappointing. Sunil, who is always known for his lively comedy looks pale and out of place in the film.

Post interval, the film is dragged into an unnecessary zone and the proceedings are made to look silly. The main aim of the film is sidelined and the supporting characters also do not have much depth in their roles.

Yet another major drawback of the film is the presence of songs. They test your patience to another level and keep popping out at regular intervals disturbing the flow of the film big time.

Production values are top notch as the film is shot in some rich locales. Camera work by Chota K Naidu is superb and he is the sole reason for the film to look visually good. Dialogues are decent and so was the art direction. At least three songs could have been easily edited out in the film.

Coming to the director Vasu Varma, even though the story line he has chosen is decent, his execution is below par. Right when the time you feel that the film is getting interesting, a tedious screenplay and unwanted scenes take center stage and make the proceedings go haywire.

Generally, audience are very used to Sunil’s comedy and crazy feats on screen. But sadly, that is missing big time with his role in Krishnashtami. Interesting interval bang and some comedy scenes here and there are basic assets of this film. Watch it only if you have nothing else to do as this film has nothing new to offer and ends up as a routine and outdated family drama.