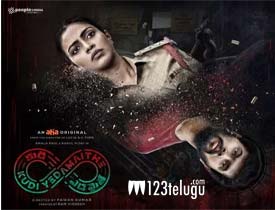 AHA is back with one more original web series called Kudi Yedamaithe which is directed by Pawan Kumar. The eight-episode web series is out now and let’s see how it is.

Aadi(Rahul Vijay) is a delivery boy who wants to become an actor. He gets stuck in a time loop and understands that the day of Feb 29th is coming to life, time and again. The same is the case with CI Durga(Amala Paul) as well. In all this, there are several kidnappings that are happening in the city and a young pregnant lady is in danger of getting killed. How Aadi and Durga’s time loops are connected to real life and how they stop things from going wrong is the whole story of Kudi Yedamaithe.

One of the show-stealers of Kudi Yedamaithe is young actor Rahul Vijay who gets a clever role in the show. This series gives him a lot of scope to perform. Rahul gets the same situations time and again but has to give different expressions each time and he did so well in the series and is the best part of the show.

Amala Paul plays the cop who has a drinking problem. The star heroine looks a bit rustic at the beginning of the show but manages to hold the fort by the end. All her investigation scenes are just about okay. The supporting cast is all new and does their job well.

The first two episodes are brilliantly narrated and create a curiosity factor in the show. The production values and night effect is showcased well in the show. The whole kidnappers’ angle and the way they deal with the crime is also impressive.

One of the biggest minuses is the loop factor in which the story is narrated. A single day is showcased multiple times and this looks good on paper with different happenings. But the director has wasted so much time that he showcases one scene at least four times which was not necessary at all.

The emotional angle in the show is missing as the crimes done or the way the cops deal with the whole crime angle is weak. The screenplay is quite unique and the repetition of scenes could have been avoided.

The connection between the characters of Aadi and Durga is not showcased well and why they are in a loop is explained inefficiently. The series gets boring from the 4 and 5th episodes and only catches interest in the last three.

Production values of the series are top-notch. The BGM is decent but could have been a tad better in the end. Dialogues are good and so was the production design. The costumes, makeup, and camera angles showcasing the night effect are good.

Coming to the director Pawan Kumar, his concept is good. He starts with a solid bang but confuses the audience with the multi-layered screenplay which is hard to understand for a common audience. Also, he does not complete the twists and rushes the ending. More than the crime angle, he focuses much time on the time loop which bores the audience in the mid parts.

On the whole, Kudi Yedamaithe is a web series that has a very interesting premise. It starts with a bang and creates an intriguing factor for the audience for the most part. The mid-episodes with some repeated scenes get a bit dull but the rest of the series has interesting thrills and taut performances making it a decent watch this weekend.