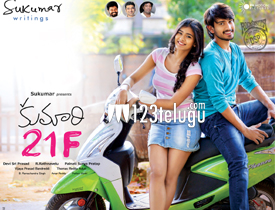 After a huge round of promotions, the much awaited Sukumar production, Kumari 21 F has finally hit the screens today. Let’s now see whether the film lives up to all its hype or not.

Siddu(Raj Tharun) is a happy go lucky middle class boy who falls flat for a beautiful looking girl named Kumari(Heba Patel). As soon as he starts getting closer to her, Siddhu often gets confused with Kumari’s bold and daring attitude.

Even though he is neck deep in love, Siddhu keeps suspecting Kumari’s character and past. One fine day, his suspicious attitude creates a huge rift between the couple and they break up. But some where in his heart, Siddhu still loves Kumari and decides to go against all odds to win his love back.

What will he do now ? How will he clear his confusion ? Will Kumari accept Siddhu’s suspicious nature ? That forms the rest of the story.

Story of the film is quite contemporary and has been set nicely in today’s age and time. Raj Tharun is a pretty confident actor and proves his acting prowess with a very complicated character. The way he showcases various emotions throughout the film speaks volumes of his talent.

Heba Patel is the best of the film and showcases supreme talent. She had a tough role to portray and Heba performed to the best of her capabilities. She carried the oomph factor well and also gave a mature performance during the end. Noel Sean and the actors who played his friends are impressive in their respective roles.

Kumari 21 F is clearly targeted at the youth and it manages to satisfy them with some bold dialogues and raunchy scenes. Last half an hour is quite emotional and the way director Surya Pratap ends the film in a mature way is also quite commendable.

The boldness and the way heroine’s character goes over board in certain scenes should have been mellowed down a bit. As said earlier, this film is only for the younger lot and family audience will find it quite difficult to sit through it.

The story behind Raj Tharun’s father and the way the director has molded his track with the main plot is below par. First half of the film moves at its own pace and has scenes which have been only added to attract the B and C centers.

As expected, both Ratnavelu and Devi Sri Prasad are the unsung heroes of Kumari 21 F. Devi Sri gives a thumping music score and his back ground is also pretty impressive. Visuals in the film are quite endearing and the various lighting techniques used by Ratnavelu look natural and cool.

Coming to the director Surya Pratap, he has done a decent job with the film. Even though he goes overboard in showcasing heroine’s character in certain areas, he nicely justifies it up during the climax.

As expected, Kumari 21 F is a bold attempt from Sukumar. This youthful entertainer stays true to its genre and is bound to do well with the younger lot. Also, it is high time that film makers attempt hard hitting films like these once in a while. Finally, if you manage to sit through the predictable nature of the script, Kumari 21 F will surely impress you its raunchy moments, lead pair’s performance and a emotional climax.