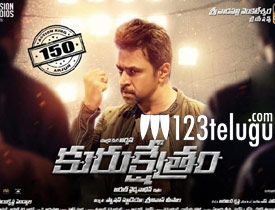 Action King, Arjun’s 150th film, Nibunan has been dubbed in Telugu as Kurukshetram. Touted to be an investigation crime-thriller, the film has hit the screens today. Let’s see whether it impresses us or not.

Ranjith Kalidoss(Arjun) is the deputy superintendent of police who is a master in solving intense crime cases. One fine day, he along with his team (Prasanna and Varalakshmi) take up a high-profile case which involves a series of murders. After each murder, the culprit throws a challenge to the police by leaving clues to his next crime. Who is this mysterious murderer? What is his intention behind the series of murders? How will Ranjith and his team nab the murderer? To know this, you have to watch the film in theaters near you.

Undoubtedly, Arjun is a major asset to the film. Even after doing 150 films, Arjun still has that stylish screen presence. In this film, he tried to present himself in a new avatar which reflects his dedication and sincerity towards work. If not for him, no one would have done justice to the role as Arjun carried the film on his shoulders. Suman and Suhasini looked dignified as a rich couple.

Prasanna and Varalakshmi, who acted as crime branch team members are good in their roles and did whatever they could to lighten up the proceedings. A girl called Chandana was good in her role. Though her character has limited screen presence, it is a key factor in the proceedings. The guy who played the psycho killer was decent in his role.

After a decent first half, the proceedings in the latter part are narrated on a bit slow-paced manner which may not go well with our Telugu audience. Especially, the climax sequence looks dragged and diluted as more than the action part, too many arguments happen between the hero and antagonist.

A few illogical scenes like the murderer happily roaming on roads look silly in this highly authentic CB-CID interrogative case. As said above, the film sticks to its investigative genre and those who expect commercial stuff like songs and comedy will be disappointed.

Background score by S. Navin is arresting as it elevates a few crucial scenes to the next level. Editing by Sathish Suriya is decent as he kept the runtime short and crisp. Cinematography by Arvind Krishna is impressive as he tried to bring the right texture to the dark frames. Production values for this limited budget film are good.

Director Arun Vaidyanathan’s story has a lot of depth in it but his screenplay lacks proper grip and makes the proceedings unengaging. If he would have worked on writing watertight screenplay things would have been on the next level for sure.

On the whole, Kurukshetram is a routine crime thriller which impresses only in bits and pieces. The first half is decent but the latter half falls flat as the director fails to carry the momentum and makes the proceedings slow-paced with dragged narration. All those who like crime thrillers can give this film a shot but the rest can skip the film this weekend and watch it when it is aired on TV.