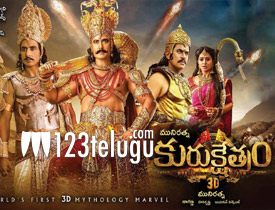 Continuing the trend of dubbed films, yet another Kannada film which has hit the screens today is Kurukshetram. Let’s see how the mythological drama turns out to be.

This adaptation of the Mahabharata is told through the eyes of Duryodhana(Darshan). The film deals with the rise and fall of Duryodhana and how he ends up being manipulated by Sakuni(Ravi Shankar). The film also showcases Karna’s(Arjun) loyalty and how other key members in the famous mythological story create an effect on the proceedings.

The scale of the film is pretty good and watching it in 3D enhances the viewing experience visuals wise. The film has a huge star cast and every one of those did an impressive job in their roles. Action King Arjun in the role of Karna is quite good.

Darshan as Duryodhana was apt and created a good impact on the proceedings. One song shot on him is pretty good. Sonu Sood is decent as Arjun looks perfect and carries good screen presence. The costumes and locations selected deserve a special mention. The war sequence which has been showcased in 3D looks good on screen.

The film is heavily inspired by NTR’s classic Dana Veera Soora Karna. Most of the narrative is the same and climax also has been lifted from that film. Too much focus has been given on the visual effects and in this, the narration goes for a toss.

Some of the VFX done looks cheap and of a low standard. The pace of the film is also very slow as many unnecessary scenes have been added to make the runtime long. The screenplay also lacks focus as many elements which could have been elevated were given a miss.

Production values of the film are top-notch as the makers have not at all compromised on the budget of the film. Editing could have been better as the runtime would have been made better by ten minutes. The camerawork of the film is excellent as it showcased the 3D effects in a decent manner. Music of the film is disappointing and so was the background score of the film. Coming to the director Naganna, though he had the thought of making this big mythological film right, his execution is below par. Except for a few scenes, he does not create much interest for the audience.

Only the whole, Kurukhstram is the same old take on Mahabharata’s famous feud between Pandavas and Kauravas. The only special thing is the 3D effect which looks decent. Apart from that, the film has nothing going its way because of its dull execution and shoddy screenplay. Except for a range of Kannada stars playing key roles, this film has nothing to offer.