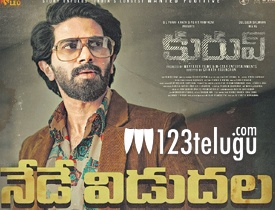 Along with two Telugu films, a dubbed Malayalam film in the form of Kurup has been released today. Starring Dulquer Salman, this film is out today, and let’s see how it is.

Gopi Krishnan(Dulquer Salman) is a small-time thief whose crimes get bigger. In this process, he also falls in love with Saradamba(Shobita Dhulipala). As time passes by, Gopi Krishna plans this one big crime to settle down and makes everyone believe that he is dead. He then takes an avatar of Sudhakar Kurup and becomes India’s most wanted fugitive. Who is this Kurup and what’s his life story and how he evades the cops is the story.

Dulquer Salman is a crazy actor and does the best in this film. The film showcases his rise and the various aspects in this regard have been acted so well by Dulquer. Be it his looks, body language, or screen presence, Dulquer is a one-man show.

Shobitha Dhulipala is amazing as the heroine and is gorgeous in her homely looks. Indrajit Sukumaran plays his supporting role well and so were the supporting cast. The story of the film is quite interesting and the manner in which Duluqer’s life graph has been showcased is also good.

Gopi Krishna’s character is ended and Dulquer Salman gets a new name in the film. All the scenes which relate to this aspect are not that effective and do not create much impact.

The film has decent thrills in the second half but gets bogged down in the first half. The so-called suspense-filled scenes are not that great and create a dull effect. Also, the film takes its own sweet time to enter the main plot.

Production values of the film are top-notch and even better is the camera work. The way crime scenes are showcased looks good on screen. The BGM and costume design for Dulquer is also amazing. Coming to the director Srinath, he has done a passable job with the film. Though he showcased Dulquer and his character, well, the conflict point is not handled well in between. But the film has a decent climax.

On the whole, Kurup is a crime drama that has a stellar performance by Dulquer Salman. The film has decent thrills but goes down in the emotional department. Also, the pace is slow and confrontation scenes are dull. All those who love Dulquer Salman will lap up this film but the rest can have their options open.