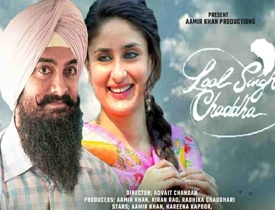 Aamir Khan scored a huge flop in the form of Thugs of Hindostan a few years back. He is now out with his comeback vehicle Laal Singh Chaddha. The film has also been released in Telugu and let’s see how it is.

Laal Singh Chadha(Aamir Khan) is a mamma’s boy right from his childhood. He falls in love with Rupa(Kareena Kapoor) but sadly she leaves him at different stages of his life. With disappointment, Laal Singh embarks on a journey of self-discovery. What troubles does he face? Did he marry Rupa finally? and where does the character of Chay Akkineni fit in this setup? To know the answers, you need to watch the film on the big screen.

Aamir Khan shows his brilliance in a few scenes but majorly mimics his character from PK. All his scenes with Kareena Kapoor are quite good. Speaking of Kareena, she fits her role perfectly and does able justice to it.

Chay Akkineni makes his Hindi debut and was quite good in his role of Bala. He brings a comedy touch to the film and all his scenes with Aamir are the highlights. Mona Singh who plays Aamir’s mom is also impressive in her role.

Not many know that Laal Singh Chadha is the official remake of Tom Hanks’s Forest Gump. But Aamir and his team get it wrong completely. The emotions go for a toss as the film lack proper drama.

Aamir Khan’s films are known to have rooted emotions but that is not the case with Laal Singh Chadha. There is no single scene that gets you teary-eyed. Aamir tries hard to salvage his performance but the screenplay lacks the punch.

One of the biggest drawbacks is the pace. The film is 167 minutes long and feels like you are sitting forever. The second half goes downhill as there is no story, the screenplay is bad and the ending is quite bland.

Another aspect where the film goes down is the lack of conflict. The character of Laal Singh does not have any enemy to face. It is his plain journey that has routine problems which the audience has seen in so many films earlier.

Production values of the film are top-notch. The film starts in the 80’s and the change in the timeline has been showcased superbly. The music by Pritam is very good and the Telugu dubbing was also excellent. Editing is pathetic as close to half an hour can be easily deleted. The makeup done for Aamir is quite good.

Coming to the director Advait, he has done a very bad job with the film. Looks like Aamir Khan has taken the project way too much into his hands that the young director did not get any scope to narrate the film in a gripping manner. The film lacks basic soul and Aamir is seen running in the film for the most part. Seeing the film, the audience will also run away from the theaters.

On the whole, Laal Singh Chadha is an epic disappointment. The film is boring, lacks drama, and is quite lengthy. Chay Akkineni fares well but Aamir’s magic is clearly missing in this film. Even though Aamir’s films are bad, he never disappoints with his performance. But sadly, in Laal Singh Chadha he too looks lost and disappoints his fans and general audience making this film a bit letdown.