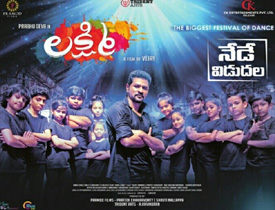 Choreographer turned actor, Prabhudeva’s dance-based film, Lakshmi has hit the screens all over today. Let’s check how it is.

Lakshmi(Ditya) is an aspiring dancer who wants to win the Indian Little Champs title. Due to her family restrictions, she is unable to fulfill her dream. This is the time, Vijay Krishna(Prabhudeva) spots Lakshmi and helps her join a dance academy in Hyderabad.

When everything is set up for Lakshmi’s group to perform at the Indian Little Champs show, one of the committee members throws Lakshmi and VK a massive challenge. What is that challenge? Will VK accept it and come out victorious in the end? To know this, you need to catch the film in theaters near you.

One of the major plus points of the film are the kids who performed at the dance show. They are just amazing and it’s an absolute treat to watch them perform some difficult dance movements with so much ease and flexibility.

Especially, Ditya, who played the titular role is just outstanding. She is seen dancing throughout the film with so much grace and impressive facial expressions. Upcoming heroine Aishwarya Rajesh’s performance as a responsible young mother is convincing.

Not to forget, Prabhudeva, the Indian Michael Jackson. After so many years of his dancing career, PD still manages to give goosebumps to the audience with his enthralling and electrifying dance moves. The five-minute dance rehearsal in the flashback episode where Prabhudeva keeps on dancing with different variations is just magnificent.

Like any other dance-based film, the core point in Lakshmi is also the same. Two dance groups fighting for a title, their back stories and finally everyone uniting in the end, such stories are quite similar in many dance-based films. As the film mainly deals with dance there are no other basic commercial elements.

Yet another minus of the film is that the emotional bond between Prabhudeva and Aishwarya Rajesh’s relationship is not showcased in a proper way. The film’s pace drops a bit during pre-climax as the proceedings run on a very predictable note.

Director Vijay, who is widely known for his emotional dramas has come up with a regular dance-based film. But he nicely inserted the required emotions at appropriate intervals. His idea of making a dance-based film with kids is appreciable and Vijay has worked very hard to extract superb performances from the kids.

Editing work by Anthony is good as he kept the film’s runtime short and sweet. Cinematography by Nirav Shah is apt as he nicely exposed the stage setup and color texture decently. Lastly, music by Sam C. S., which is crucial for a dance-based film shines as the beats and song bits which come in the latter half of the film are foot tapping. Production values for this limited budget film are good.

On the whole, Lakshmi is a typical dance-based film with some amazing dance moves from the little kids. Prabhu Deva and the little girl Ditya are show stealers. On the flip side, the story and core theme of the film are routine and quite old. If you are ok with this regular template and slow-paced narration, Lakshmi is worth a watch for all dance lovers.