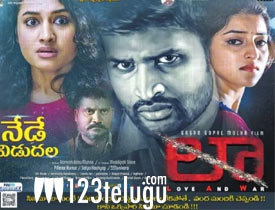 Continuing the trend of low budget films, yet another movie which has hit the screens today is Law. Touted to be a crime thriller, let’s now see how the film turns out to be.

Vikram(Kamal Kamaraju) is a police officer who falls in love with his sister’s friend Radha(Mouryani). As time passes by, even Radha falls for Vikram and the couple spend some happy times together. On the other hand, Radha is often followed by her building watchman named Rudra. After a point in the story, the watchman and his four close friends keep getting killed one after the other. Who is this Rudra? What does he have to do with Radha? and how does Vikram solve this case? That forms the rest of the story.

Kamal Kamaraju is the biggest plus point of this film as his looks and body language suit his cop role perfectly. Acting wise, Kamal has improved a lot and he does well in the climax of the film.

Mouryani does an impressive job in her role which has two variations. She gets a good character and she excelled in it with her emotional performance. Bigg Boss fame Pooja Ramachandran was neat in her given supporting role. The actor who did the role of apartment president evoked some laughs with his comedy.

Though the director had a gripping story of how women are being harassed nowadays, he could not execute it in a proper manner. In the second half, the director could not elevate the problem properly and did not utilize the performances of the actors.

Major scenes in the second half are boring and this is where the thriller goes for a toss. There were many female-oriented scenes which could have been elevated with good emotions but the director failed to do so.

The logic goes for a toss as the film has an uneven screenplay. There are many scenes in the second half which are over the top and way too cinematic.

Editing by S Sunkara is neat enough. Production values by Ramesh Babu are top notch for that budget spent. Camerawork by Amar Kumar is neat and showcases the thriller in a decent manner. Coming to the director Gagan Gopal, he has done a disappointing job with his execution. The film had scope for good episodes but not once did the director utilize this opportunity and narrated the film on a bland note.

On the whole, LAW is a disappointing crime drama which is executed in a boring and wayward manner. Even though the film had a contemporary and relatable concept, the silly proceedings and logicless narration take the film down making it a tedious watch this weekend.