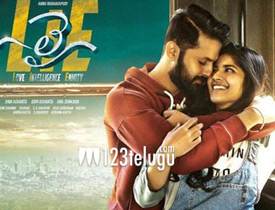 Right from the time the first look was out, there was a superb buzz created for Nithin’s LIE. Touted to be a stylish action entertainer, this film has hit the screens today. Let’s see how it is.

The entire police force of India is in search of a dreaded criminal called Padmanabhan(Arjun) who has now settled in the US. On the other hand, Satyam(Nithin) is a road side Romeo from the old city who is looking for some quick money. An unexpected twist involving the heroine(Megha Akash) lands Satyam in the US.

There, he suddenly crosses his path with Padmanabhan and things change upside down for him. What will he do now? Who is this Padmanabhan? and why did Satyam cross paths with him in the actual place?. To know the answers you need to watch the film on the big screen.

One of the biggest and major assets of the film is action king Arjun. His role is the strongest in the film and the way senior hero performs will impress you big time. His role has been written quite effectively with good variations and modulations. Arjun’s look and the way he has dubbed for his character looks very nice.

Nithin has clearly upped his game after A.Aa. He looks super handsome and carried off a hefty role with ease. His dances, fights and acting performance are quite good and he too delivers what is required of him. Yet another major asset of the film is the decent twists that are revealed at regular intervals.

Debutante Megha Akash is strictly okay but her track is over the top. Interval bang and the way action has been styled look top class.

One of the biggest minus points of the film is the lack of entertainment. There was a lot of scope to add humor but the director failed to add one. There are many forced tracks in the film. The way comedian Madhu comes into the plot, heroine going to the US with Nithin, all these plots look silly and over the top.

The film takes a lot of time to get into the actual story line and has a roller coaster of a feel. Whenever you think, the film is getting very interesting with scenes featuring Arjun and Nithin, the proceedings drop heavily with heroine’s track and forced scenes. Too many cinematic liberties have been taken by the makers which can catch you off guard.

Full marks to 14 Reels for putting in a lot of money as the film looks super rich and gives the feel of a Bollywood film. Music by Mani Sharma is pretty good but his background score is just awesome and elevates the film to a decent level. Dialogues are good and so was the art direction. Editing is below average as at least ten minutes in the film could have been easily chopped off. Nithin has been styled supremely well in the film.

Coming to the director Hanu Ragahavapudi, he has written the plot extremely well but his execution is not up to the mark. His inexperience is showcased in many areas as he could not balance the film and added many unnecessary elements. The villain’s track has been handled superbly by him. Had he added some fun or romance here and there and made the run time crisp, the effect would have been even better.

On the whole, LIE is a film which has a very interesting plot and even the strongest of support from the lead stars. But it is the execution that falters as unnecessary scenes keep coming in at regular intervals spoiling the effect of the thriller a bit. However, rich production values, Arjun and Nithin save the film with their power packed performances and make LIE a watchable fare for action movie lovers.