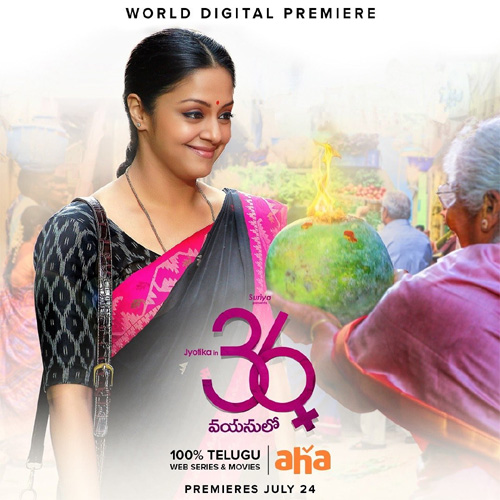 So, continuing the series of reviewing movies and shows during the lockdown period, our today’s pick is the Telugu film 36 Vayasulo. The film is available on AHA and let’s see how it is.

Vasanthi(Jyothika) is a 36-year-old housewife whose aim is to go to Ireland and settle down along with her husband and 13-year-old daughter. One fine day, she comes to know that none other than the president of India wants to meet her. An excited Vasanthi messes up the meeting by fainting at the right moment. She becomes a joke all over the internet. As time passes by, her husband and daughter fly to Ireland. Vasanthi is left alone in a depressed stage and this is the time her friend brings out the best in her and makes Vasanthi start her own business. Within a short period of time, Vasanthi proves her worth and stuns the word. Well, why did the president want to meet her, and how does she becomes successful in life. That forms the rest of the story.

This was the comeback film of Jyothika and she does an amazing job. The film becomes enjoyable only because of her performance. Jyothika is known for her emotional avatar and in this film, she gets a chance to showcase all that through her powerful expressions. Be it comedy, tragedy, and seriousness, Jyothika does it all with aplomb.

Rahman who plays Jytohika’s husband also does well in his act. He as a person who does not encourage his wife, the noted actor shows his act well. The whole woman empowerment angle in the film is nicely showcased. How middle-class wives if encouraged can go a long way has been executed well.

Santhosh Narayanan’s Rasathe is filmed well and R. Diwakaran’s visuals are pleasing. Production values of the film look top-notch as Suriya has spent well for the film. The Telugu dubbing is also good and the manner in which the visuals are showcased throughout the film looks good.

The first half-hour is quite boring and brings boredom to the audience. The director takes forever to enter the main plot and wastes too much time to showcase Jyothika’s daily routine in her life. This is also the time where the screenplay goes for a toss as many uneven scenes are brought in throughout the film for no reason. The climax of the film has also not been handled well and looks forced.

Also, the film is heavily inspired by Sridevi’s English Vinglish and all those who have seen the film, 30 Vayasulo look been there done that kind of a scene. The way Jyothika’s character reaches the top is shown in a bit over the top manner. Also, the husband’s role is shown in a way too much negative manner which was not needed at all.

Coming to the director Rosshan, he had done an okay job with the film. If he would not have added way too many plots and made the narration simple, things would have been even better.

Overall, 36 Vayasulo is a woman empowerment film that has Jyothika’s stamp all over it. It is her commendable performance that holds the film. Set in a contemporary and realistic society, the makers showcase how a woman fights it to the top with her dedication. The first half an hour is quite tedious and once you sit through it, the film becomes watchable and ends as a time pass watch this lockdown period.