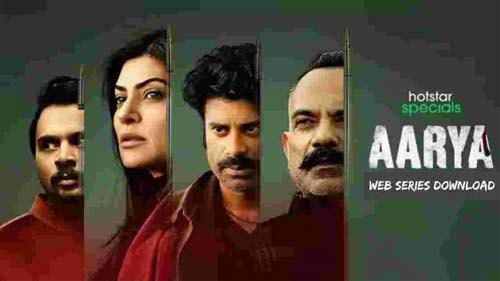 So, continuing the series of reviewing movies and shows during the lockdown period, our today’s pick is the latest web series Arya that has star heroine Sushmita Sen in a lead role. The series is available on Hotstar and let’s see how it is.

This series is based on the Spanish show Penoza. Aarya(Sushmita Sen), a mother of three is living a happy life with her rich husband Tej Sareen(Chandrachur Singh). One night. Tej is killed mysteriously by a masked man and things change upside down for Arya, She then takes it upon herself to find the reason behind his murder. Aarya knows Tej only as a loving husband but there are some very dark secrets that Tej has been keeping from Aarya. What are those and how does Arya solve all these issues alone is the story of the series.

The major plus point of Aarya is undoubtedly Sushmita Sen. It is so good to see her after a long time. Sush’s screen presence is immaculate and unmissable as she commands every single scene that she is in. Also, the ease with which she balances being a charming mother and a strong woman who wants to know who killed her husband is remarkable.

Then comes Sikandar Kher’s performance as the menacing Daulat, who not only personifies hatred but also manages to add an emotional depth to his character. Yesteryear year actor Chandrachur Singh is good in his brief role.

The background music is yet another highlight as it elevates each scene to the next level. The drama behind the murder mystery is nicely brought in with a gripping narration which keeps you hooked most of the time in the initial episode.

The pace at which Aarya is set is a bit of a drawback as it is slow and every episode is a bit lengthy. Writer Ram Madhvani shows us the murder in the very first episode itself and stresses on relentless rambling between friends and family throughout the rest of the episodes. After a point, the slow pacing really frustrates and this is where good editing could have done the trick.

Overall, Arya is an action drama that has some thrilling episodes. Sushmita Sen makes a strong comeback and rocks the screen with her standout performance. Though the pace of the show is slow and its storyline is predictable, this series still makes up for a decent watch because of its drama. You may watch it.