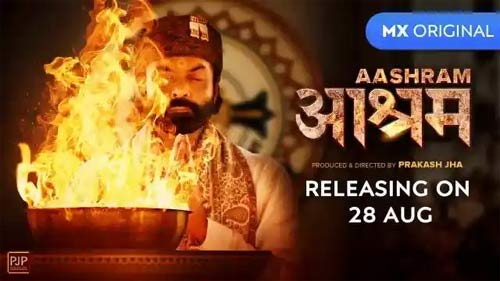 So, continuing the series of reviewing movies and shows during the lockdown period, our today’s pick is the Hindi series Ashram starring Bobby Deol and directed by Prakash Jha. The series is available on MX Player and let’s see how it is.

The series is based in Uttar Pradesh and showcases the life of Kashipur Wale Baba(Bobby Deol). Pammi(Aaditi Pohankar) is a backward caste girl who gets help from Baba and very soon, she and her brother become bhakts of the Baba and join his Ashram. On the other side, the Baba runs a huge nexus through his Ashram and is also involved with the murders of many. The whole series is as to how the Baba dominates the scenes, how the cops try to nab him, and how an innocent Pammi gets entangled in the world of this clever Gordman.

Bobby Deol has taken a U-turn from his regular Bollywood roles and dons the fake Baba act and he is dam good in the series. His role demands a calmness on his face and yet be supremely cunning and criminal and Bobby does that with supreme ease. He does a lot of talking through his eyes for the most part of the show.

The whole setup of the series is terrific and a lot of detailing has gone into constructing the Ashram and production design needs a special mention. After SHE, Aaditi Pohankar gets a meaty role and she is amazing. Tridha Chowdary is glamorous in her role and Tusha Pandey as Satti is effective. The supporting cast of the series is spot on and does their roles supremely well. The way cops in UP operate, how fake Baba’s live their life, how politics is planned, all this Prakash Jha has showcased in an effective manner.

The way various threads of the story are joined by the end of the first season is amazing. Darsha Kumar as the cop is too good. The BGM of the series is amazing and camerawork needs a special mention. The gripping crime scene and how the big heads deal with the caste system and how deep-rooted politicians play the upper hand is shown nicely.

Firstly, this is a very long series and that can be a put off for many. Each episode is over 40 minutes long and gets on you sometimes. The director Prakash Jhan goes way too in detail of each character and hence wastes a lot of time.

Though the first three episodes are gripping, the ones that follow mostly showcase the rituals in the Ashram and how Bobby deals with his Bhakths. Such scenes should have been trimmed to make things interesting for the audience. Some political aspects are strecthed for no reason.

On the whole, Ashram is a gripping web series from veteran director Prakash Jha. It shows how a few Godmen in Inda use their fame and cheat the public in th name of faith. The story, backdrop and performances are just amazing. Icing on the top is Bobby Deols’s Baba act. Barring the lengthy run time of the series, this one makes for a gripping watch if you love crime dramas.