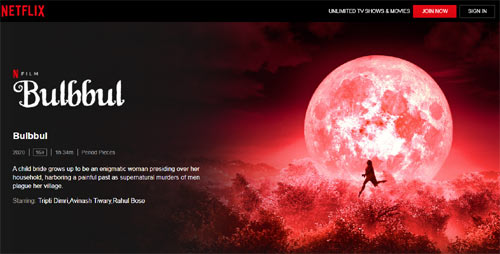 So, continuing the series of reviewing movies and shows during the lockdown period, our today’s pick is the new Hindi film Bulbbul. The film is available on Netflix and let’s see how it is.

The film is set in Bengal in the 19th century. Bulbbul(Tripti Dimri), a young and free-spirited girl is married to Indranil(Rahul Bose) who is three times elder to her. Indranil lives in this ancestral home along with his twin(Rahul Bose) and younger brother Satya and his wife Binodini(Paoli Dam). Things start getting chaotic when Indranil’s brother, Satya starts investigating the mysterious deaths in his village where only men are being killed. Who is killing them? Is there a supernatural angle in this? and what has Bulbbul to do with all this? That forms the story.

What hits you the most is the amazing camera work and art direction. The old school charm and the way the film is set in the royal era on Bengal is just mind-blowing. The costumes, makeup, jewelry, and the whole demeaning camerawork, things look superb in this film. In a way, the production values of Anushka Sharma are top-notch.

Coming to the actors, Tripti Dimri plays the main lead and she is amazing in her role. Her stature and the way she carries various emotions on her face are top-notch. Rahul Bose is superb in his effective role and brings a whole new depth to the film. Paoli Dam is pretty good in her serious role and so were the rest of the cast.

The supernatural thriller has a solid premise and the way director Amar Kaushik narrates this serious tale with a haunting backdrop holds you most of the time. The dialogues are superb and the manner in which superstition, mythology, history, and fantasy are mixed is good. Amit Trivedi’s BGM is top-notch.

The so-called spooky scenes do not scare you that much as promised in the trailers. The story is a bit complex as it runs in two time zones and will be a bit hard to follow for the audience who do not understand Hindi that much. Apart from Bulbbul’s role, the other characters do not have much depth and why they are behaving in a particular manner in the film is not shown clearly. Apart from the strong technical aspects, more focus should have been put to make the narration simple and easy.

Overall, Bulbbul is a film that is a mix of several genres. The supernatural angle, twists, and horror effects have been nicely set up at the beginning. The film has solid technical aspects and amazing visuals but the latter part of the movie slows down with dull narration. The pre-climax and ending are managed well making it a decent watch. Don’t go by the hype and watch it with low expectations.