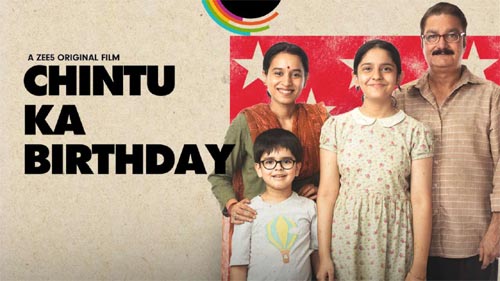 So, continuing the series of reviewing movies and shows during the lockdown period, our today’s pick is the new Hindi Zee 5 original film Chintu Ba Birthday. Let’s now see how it is.

The film is set in 2004. Chintu(Vedant Chibber) and his family of five move to Iraq illegally in search of a better life. But things turn upside down because of the deadly situations in the country. Amidst all this, the family forgets to celebrate Chintu’s birthday. Chintu’s father(Vinay Pathak) promises his son that next year, he will surely hold a solid celebration. A year passes by and when Chitu’s birthday comes, the family lands into all sorts of problems. How do they overcome it and celebrate Chintu’s birthday is the whole film all about.

Vinay Pathak is superb as Chintu’s father. The way he keeps all his problems aside and deals with his son’s happiness, the actor has showcased it beautifully till the end of the film. There is a scene where the 6-year-old kid explains the downfall of Saddam Hussain. It is the best scene in the film. How illegal immigration causes problems and how American soldiers are stuck in Iraq for years, all this is showcased so well in the movie.

Seema Pawha who plays the nagging mother in law is also good. The emotions work big time in this film as the small-time relationships in middle-class Indian families have been showcased well. production values of the film as just about okay but the camerawork and BGM are good.

The story of the film is simple and does not have any twists or turns. It is quite simple with its narration and moves at its own pace even though it is 77 minutes long only.

Overall, Chintu Ka Birthday has a unique premise and some very well-written screens. It deals with bonding in a family and how one makes sure to keep others happy even in a deadly situation like war. Barring the simple story, this film is an endearing watch and will surely impress you during this lockdown period. Go for it.