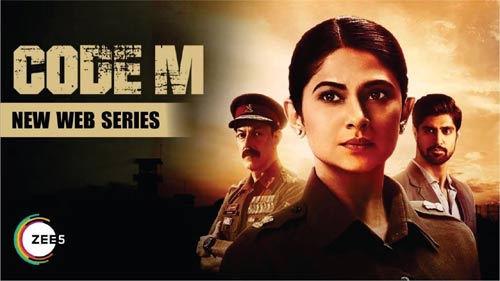 So, continuing the series of reviewing movies and shows during the lockdown period, our today’s pick is the latest web series called CODE M on Zee 5 and Alt Balaji. Let’s see how it is

The series is all about an Indian army lawyer Monica Mehra played by Jennifer Winget. She is roped in to deal with the death of an army officer and two other suspects. Things look simple in this case but as Monica starts investigating the case, she finds about a code that can send ripples in the entire Indian army. What is that code all about and how does Monica solve it is the whole story of the series.

The whole army setup and how the series is based on a code looks quite interesting. The middle episodes where the dots are really connected create a neat atmosphere. The BGM is superb and keeps the proceedings alive in most of the scenes. Each episode is 20 minutes each and the climax has been ended well with the decent masala. The emotional angle of the army people and how they sacrifice their lives are showcased well. Rajat Kapoor is the best of the cast with his decent role.

Jennifer Winget tries hard to pull of her lawyer’s role well but she does not suit one bit. The makers try hard to manage with her screen presence and in many scenes, she goes overboard and hams to no extent. The initial three episodes are very slow and do not create much interest.

The web series does not have a proper grip on the proceedings. Where some scenes are superb, most of the episodes lack depth in them. The writing is not at all strong except for a few twists in the end. There are many logics that go for a toss especially where the army related scenes are concerned.

Overall, Code M, which was released with much hype is not that engaging and has insipid writing. The last two episodes and major twists are good but apart from that, there is nothing much to rave about this show and can be left alone during this lockdown period.