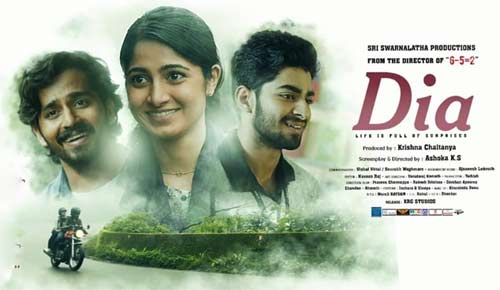 Music by : B. Ajaneesh Loknath

So, continuing the series of reviewing movies and shows during the lockdown period, our today’s pick is the 2020 Kannada romantic drama Dia. Directed by K S Ashoka, this film is available on Amazon Prime.

Dia(Kushee Ravi) is head over heels on her college mate Rohit(Deekshith Shetty). But suddenly, Rohit moves out of college and after three long years meets Dia. Cupid finally strikes between the couple and they fall in love. When everything seems to be going fine, the couple gets separated. Upset with this, Dia moves ahead in life and falls for a cute guy called Adi(Pruthvi Ambaar). After being friends with him, Dia finally falls for Adi. When this story is taking a happy turn, Rohit comes back into the picture. Who will Dia marry now? That forms the rest of the story.

What hits you the most is the performance of Dia played by Kushee Ravi. She gives an award-winning performance and showcases the pain her character goes through in a splendid manner. Her expressive eyes speak a thousand words and the young actress owns the film and carries it on her shoulders. Both the main leads do their own parts quite well.

The major twists that are showcased in the film have been timed quite well. Especially the climax it is solid and will shock you. The dialogues, maturity in the character, and the screenplay are superb. The one-sided love angle has been expressed quite well in the film. The concept of finding love again after hear break is shown in a very convincing manner.

While you watch the film, the twists come in as a surprise but the story is actually a simple one. The biggest problem of the film is the pace which is a tad slow especially in the middle part of the film.

Overall, Dia is one of the most well-made romantic dramas in the last few years in south cinema. The elegant romance, solid performances, heartbreak, and heavy emotions will surely impress you big time. Barring the slow pace of the film, Dia is a must-watch during this lockdown period. Recommended.