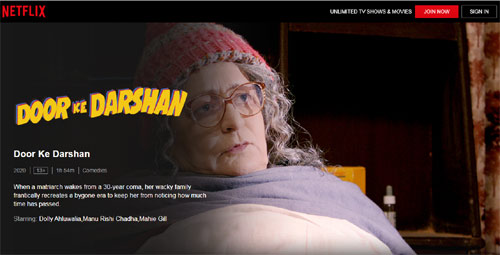 So, continuing the series of reviewing movies and shows during the lockdown period, our today’s pick is the Hindi film Door Ke Darshan. The film is available on Netflix and let’s see how it is.

The film is set in Delhi and Sunil(Manu Rishi) lives with his teenage kids after his wife Billo(Mahie Gill) leaves him for good. On the other hand, Sunil’s mother Darshan(Dolly Ahluwalia) is in a coma for 30 long years. The twist in the tale arises when Darshan suddenly wakes up from Coma. The doctors suggest Sunil that his mother’s mind is fragile and she should not go through any stress otherwise things will become dangerous. So, to keep her mother safe, Sunil tells her that she has been in a coma just for the last six months. He sets up things just how they were 30 years ago. The rest of story is as to how Sunil manages his wife, kids, and keeps his mom happy.

The story of the film is quite good and has been set quite interestingly in the rooted bylanes of Delhi. Manu Rishi is the backbone of the film and delivers a solid performance. His character has various shades and he does his complex role superbly. Senior actress, Dolly Ahluwalia is a bit over the top here and there but is perfect for her role. Mahie Gill plays a frustrated wife and does well in key scenes.

The Delhi lingo is quite good and evokes good humor. The thread between Manu Rishi and his wife played by Mahie Gill has been designed well. The humor generated in serious situations also looks good and suits the mood of the film. The flavor of the film and how relationships in below middle-class families work have been showcased well. The camerawork, dialogues, and editing is perfect.

As said above, humor is the main highlight of the film. But it is made a bit over the top in areas in which it was not necessary at all. The film starts off on a slow note and takes a lot of time to enter into the main story. Mahie Gill and her role have not been given too much importance.
The comedy generated through an adult character Bimla from a porn book has been taken a notch higher in many scenes and that was not necessary at all. The climax is also simple and is ended in a jiffy which also disappoints.

Overall, Door Ke Darshan is a situational comedy that is set in the bylanes of Delhi. The premise and humor keeps the audience engaged most of the time. If you ignore the slightly loud characters and dull climax, this film makes for a time pass watch during this lockdown period. Give it a shot.