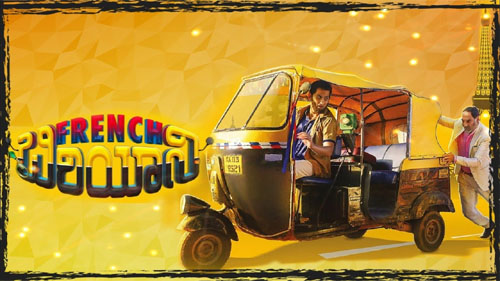 Edited by : Deepu S Kumar
So, continuing the series of reviewing movies and shows during the lockdown period, our today’s pick is the Kannada film French Biryani which has the viral sensation Danish Sait in a lead role. The film is available on Prime Video and let’s see how it is.

A French national, Simon(Sal Yousuf) lands in Bangalore, and the local mafia headed by Muscle Mani (Mahantesh Hiremath) is after him. The don’s gang mistakes this French national as a drug peddler for having their Saaman. A local auto driver Asgar(Danish Sait) also gets entangled into this whole mess somehow. What happens with all these mistaken identities fight it out with each other is the whole story of the film.

Danish Sait, the viral sensation is pretty good in his role. Though he is not at his usual best as seen in his videos, Danish does well in his key role. Some comedy punches and fun generated through the mistaken identity concept looks good in the film.

Also, the manner in which Sal Yousuf plays the French national is also pretty interesting. The punch lines and dialogues are pretty good and the language though it is Kannada has been kept simple for everyone to understand. The sings gel nicely into the narrative and camera work is impressive. The crime angle and how various threads are joined in the latter part is also good.

The director Pannaga Bharana etches his characters well into the story and even establishes the story well. But after a point, the story loses its grip with too many unnecessary scenes getting added one after the other. Also, after showcasing so much chaos, one would expect a solid and fun climax but that does not happen at all.

The ending is silly and looks a bit over the top. The comedy is also unique and will not be understood by all as it has a different sense of humor which is a bit loud. The supporting cast also overacts in many areas disturbing the effect of the film. The needed comedy also does not click in places it had to which is the biggest drawback.

Overall, French Biryani is a crime comedy that is based on the concept of mistaken identities. Danish Sait does well in his lead role and the comedy works in parts. But the film falters in the climax and has many predictable scenes which you have already seen in the Hindi film Delhi Belly. So, all those who like such humor and want to see what Danish Sait has done in a full-fledged role, you can watch it. But the rest can take it easy.