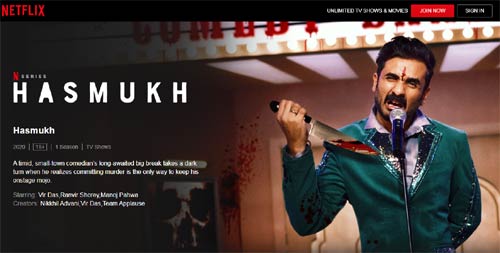 So, continuing the series of reviewing movies and shows during the lockdown period, our today’s pick is the Hindi web series Hasmukh. Directed by Nikhil Gonsalves, this series is now available on Netflix.

Hasmukh(Vir Das) is a small-time comedian who wants to make it big in the world of stand up comedy. He joins comedy king Gulati(Manoj Pahwa) and waits for his turn to make his debut. But when he does not get his chance, an upset Hasmukh kills Gulati brutally and takes over his show in a splendid manner.

All this is watched by Gulati’s manager Jimmy(Ranveer Shorey) who now becomes Hasmukh’s manager as well. But in all this, Hasmukh has serious performance issues doing standup comedy. Jimmy makes him understand that for him to do good on the show, he needs to kill somebody. The rest of the story is as to how Hasmukh starts killing people for his own benefit and what problems does he face in the due course of time.

The basic plot of the web series is quite good and has some interesting stories behind the killings. Vir Das gets the role of a lifetime and delivers a good performance. But it is Ranvir Shorey, the senior actor, who shines as Jimmy. His dialogues, screen presence makes things quite interesting. The first three episodes are quite interesting and have humor as well as a lot of riveting drama. The production values of the web series are top-notch. Dialogues are good and so is the whole crime angle that is showcased initially in the series.

The series has such a good premise and starts off quite well. But once the fourth episode starts, things go downhill from there. A good plot is wasted as many new characters are introduced for no reason. Just to make things interesting, the makers add so much gore and crime which is not relatable to the characters at all.

The pace drops and the series enters its own world altogether. There was absolutely no need to have 10 episodes for such a story and things could have been wrapped up in six or seven episodes. The emotions of the lead characters change after a time and a small point is stretched for no reason.

Overall, Hasmukh has a superb premise and also some fine performances. It is a lot of fun to watch the initial few episodes of the show but from thereon, things get de-railed, and logic goes for a toss. A small point gets dragged forever and bores you in the latter episodes making it a dull watch during this lockdown.