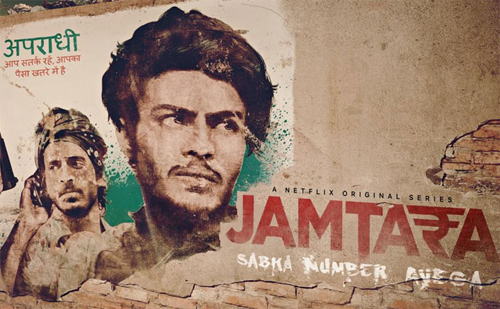 So, continuing the series of reviewing movies and shows during the lockdown period, our today’s pick is Jamtara, a gritty Hindi web series set in the small town of Jamtara, Jharkhand. The web series is directed by Soumendra Padhi and is streaming on Netflix.

Dolly Sahu (Aksha Pardasany), an IPS officer gets transferred to Jamtara, a notorious village famous for illegal activities. A crazy group of youngsters starts a fake bank call center to loot money from innocent people. Dolly arrives in Jamatara and finds out that not only the young guys but a big minister(Amit Sial) are also behind this. The rest of the story is as to how Dolly ends the crime scene in this village.

Aksha Pardasany, who acted in south films does superbly as a cop. All the young actors who are cast as the small-time crooks are natural with their performances. How they indulge in fake calls and cheat customers with their bank cards has been shown interestingly. The scenes where these young crooks marry girls just to help them in their fake calling is showcased amazingly in one of the episodes. The crime angle and how the cops find it very hard to tackle such a tricky situation has also been elevated well in the web series.

Overall, Jamtara is a crime drama that has some gritty scenes with amazing performances. The small town setup and banking crime showed looks convincing. A bit stretched in the middle episodes and hard on foul language, this web series can be given a shot for its raw taking and decent narration.