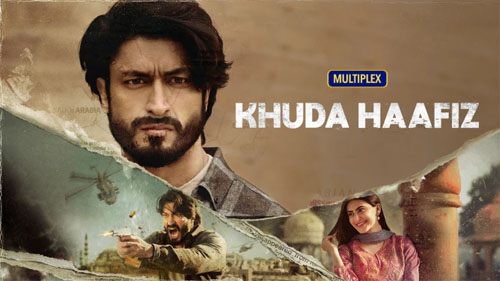 So, continuing the series of reviewing movies and shows during the lockdown period, our today’s pick is the Hindi film Khuda Hafiz. The film is available on Disney-Hotstar and let’s see how it is.

The film is set in 2008 when the world was going through a financial crisis. Sameer(Vidyut Jamwal) and Nargis (Shivaleeka Oberoi) lose their jobs just after getting married. Nargis moves to Noman through a broker for a job. The same broker tells Sameer that very soon, he will also get placed in the same country. But as expected, Sameer gets never placed and upon this, his wife, Nargis also gets kidnapped. How does Sameer go to Noman and save his wife is the whole story of the film.

If you look closely, in all Vidyut Jamwal films, he only turns out to be the highlight and the rest are disappointing. The same is the case here in this film as Vidyut is the highlight of the film. His action, performance are the ones that take center stage. New heroine, Shivaleeka has nothing much to do in the film. Annu Kapoor is superb as the Taxi driver who helps Vidyut in his mission. The production values are decent and the action sequences are mind-blowing. The dialogues are good and so was the BGM. The camera work is exceptional in all the action sequences.

The plot of the film is quite old and has been seen in many films to date. Though the presentation looks a bit novel here and there, the basic theme is the same. The film takes forever to get into the main plot as a good 15 minutes is wasted for establishing the premise and characters.

The emotions should have been a bit strong in many areas which could have made matters better. A few logics go for a toss in this film which is set in the fictional country of Noman. After a point, things become too easy for Vidyut in his mission and this looks over the top.

On the whole, Khuda Hafiz is yet another action drama where the action clicks but the rest doesn’t. The action sequences and some thrills are good but the story is routine and predictable. If you are the one who likes such action flicks, give this film a shot but there is nothing new or special in it.