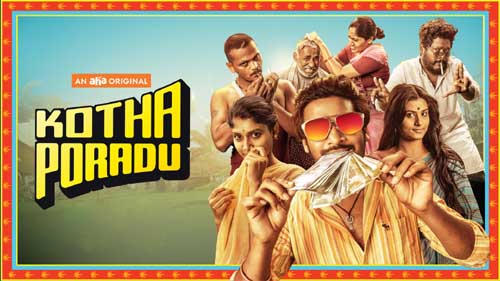 So, continuing the series of reviewing movies and shows during the lockdown period, our today’s pick is the Telugu web series Kotha Poradu. This series based in rural Telangana is directed by Anvesh Michel. It is now available on AHA and let’s see how it is.

The web series is about Raju (Anvesh Michael) a happy go lucky youth who has become a trouble for his parents. Raju’s dad, Istharayya (Sudhakar Reddy) is no less colorful as he has multiple wives and a lot of debts in his village which Raju needs to take care of. Raju also has a childhood sweetheart called Nagma. Adding to Raju’s problems is his feud with Nethi Rajesh (Raj Tirandasu). Amidst all this, what does Raju do to come out of his problems forms the story of this web series?

The web series is made in sync sound and this gives a good effect in totality. The performances are quite natural as every actor gives his best and Sudhakar Reddy stands out. The realistic nature of the web series is also gripping.

Directed by Anvesh Michael who also plays the main lead character, he is pretty good and leads from the front. Kotha Poradu has fun in good quotients and establishes the rural culture well. The starting episodes of the web series are really interesting as characters are established nicely.

Overall, Kotha Poradu is a well-made web series that has the right mix of emotions and fun. The drama is established well and the local Telangana set up is simple and endearing to watch. A bit dragged in the middle episodes but this web series ends as a good watch. Give it a shot and you won’t get disappointed.