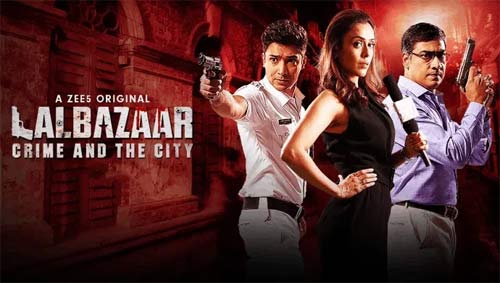 So, continuing the series of reviewing movies and shows during the lockdown period, our today’s pick is the Hindi web series Laal Bazaar which is presented by Ajay Devgan. The series is available on Zee5 and let’s see how it is.

The series is set in Kolkatta and its famous area called Laal Baazar. The Kolkatta police want to bring peace in this area and make special plans. But things get upside down when a sex worker gets suddenly killed in that area. Also, her death is related to Laal Bazaar’s police station and an aggressive cop Suranjan Sen(Kaushik Sen). What is happening in Lalbazaar. How are cops connected? and how is the whole mystery solved forms the story?

Hrishita Bhatt looks good in her role and does well in her character. Kaushik Sen is the main lead and his performance is pretty good. The noted actor holds the show well with his act. The last three episodes are quite engaging. The setup looks quite good and gives an idea of how Kolkatta is deeply rooted in its old city. The dialogues are good but the BGM is very good. The cop set up looks authentic and has some engaging conversations. The murder angle and how it is handled is also neatly done.

The initial few episodes are boring as the director Sayantal Ghoshal wastes a lot of time in bringing the original story into place. The series has way too many subplots and there was absolutely no need for that and drags the show unnecessarily. The gay episode looks weird in the show. Apart from the main lead Kaushik Sen, the rest of the supporting cast is quite dull and does not carry out the emotions well. The series is like crime investigation happening throughout but the twists that are needed are missing completely.

Overall, Lalbazaar is a crime thriller series that has a good setup and a nicely written plot. But it is the execution which plays the spoilsport. Apart from the last two good episodes, the performances, lack of strong emotions and twists make it a dull watch during this lockdown.