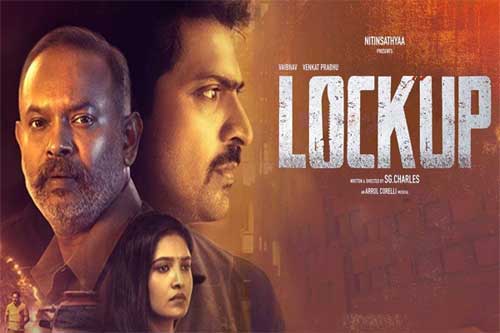 So, continuing the series of reviewing movies and shows during the lockdown period, our today’s pick is the Tamil film Lockup. The film is available on Zee 5 and let’s see how it is.

A noted cop in the city dies and in his place, Ilavarasi(Eeswari) is brought in to handle the station for a day. She starts investigating the case. On the other hand, Vasanth(Vaibhav) is a young cop whos is sincerely looking into the case and at the same time, there is also Moorthy(Venkat Prabhu) who is involved in the case and is also trying hard for his promotion. Who killed the senior cop and how does Ilavarasi solve the actual case and put the culprits behind bars.

The manner in which the scenes are narrated in a back and forth in time looks good in the film. Eeswari is getting good roles in Tamil as well and she is solid as the aggressive cop. Vaibhav is neat in his role as a small cop who is trying to make it big.

But it is Venkat Prabhu who is the best in the film as his role is amazing. The noted director showcases the cunning attitude in such a good manner and holds the film quite well. The BGM and rustic visuals are neat. The production design of the film is impressive. The first half hour is quite engaging.

After setting up the story and characters in a beautiful manner, the director decides to get over smart and adds unnecessary lawyers and subplots to confuse the audience, and this where the film goes down. What was a superb narration until then becomes a bit confusing and boring for the audience. The second part is where the narration goes down as many scenes are forced and there is also a lag in the proceedings. The audience gets a feel as to what the actual twist and get on with the film.

On the whole, Lock up is a cop thriller that has a decent premise and solid performances. The first half is pretty interesting and has engaging narration. But things get dragged in the latter part with too many subplots and forced scenes. All those who like cop thrillers can give this film a shot. But be prepared for the slow pace and a few dragged scenes.