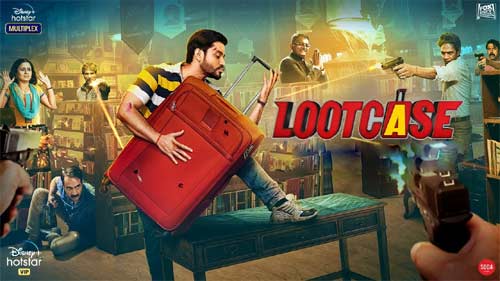 So, continuing the series of reviewing movies and shows during the lockdown period, our today’s pick is the Hindi film Lootcase. The film is available on Disney Hotstar and let’s see how it is.

Nandan(Kunal Khemu) is a middle-class guy who works at a printing press. His wife Lata(Rasika Duggal) always complains always their poor lifestyle. Upset with this, Nandan continues to lead his boring life until he finds a red suitcase filled with cash. Upon finding that no one is owning it, Nandan takes the cash and starts spending it. The problems arise when some evil politicians, dreaded gangsters, and other groups come after him for the suitcase. The rest of the story is as to what Nandan does with all the money.

What’s good?
.
The film’s plot is simple but has been set superbly in a middle-class family. Kunal Khemu is a pro when it comes to comedy and he does it again with this film. The way he generates subtle comedy with his serious and tense face is adorable. The film is filled with situational comedy and this keeps the audience engaged most of the time.

Vijay Raaz as the don and Gajraj Rao as the politician do well in their roles and evoke good humor. Rasika Duggal is superb as the nagging wife. All the scenes of Vijay Raaz and his assistants have been executed hilariously. The twists and turns that the film takes are quite neat. Dialogues need a special mention in this film. The music is okay but the BGM was loud.

Once the twist is revealed, the film becomes predictable. The film is filled with loud humor scenes and in this logic goes for a toss. If you try to find logic and watch the film in a serious mood, you will get disappointed. Also, the screenplay of the film goes for a toss in key areas and makes the plot dull in many scenes. Too many characters are introduced to make the comedy work but they only create lag in the second half.

Overall, Lootcase is a comedy that has solid casting. Kunal Khemu and the supporting cast making things quite interesting with their fun acts. The story is routine and the film has loud and over the top humor. If you are the ones who love such films, Lootcase ends as a time pass watch this lockdown period. Give it a shot.