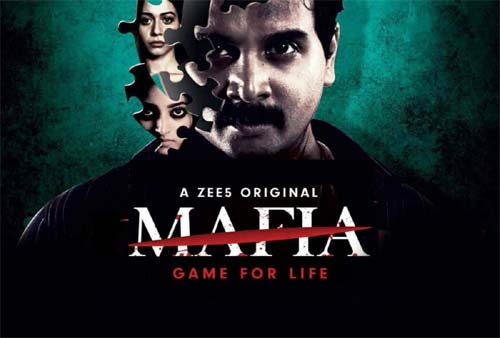 So, continuing the series of reviewing movies and shows during the lockdown period, our today’s pick is the Hindi web series Mafia. The series is available on Zee5 and let’s see how it is.

Tanya (Madhurima Roy) is getting hitched to her boyfriend Kunal (Sayan Banerjee). But before this, the couple decides to have a bachelorette party at a guest house. So, they invite select friends and head to the same place where they said goodbye six years ago after college. After they reach there, strange things start happening to each other. There is something that is haunting them from their past. What is that? and how does the group come out from the mess is the whole story of the series?

Performances wise, only Namit Das is the exceptions as he does a good job in his role. The twists that are unleashed in a timely manner are very good. The production values, look and field of the series is good. The locations chosen bring a lot of dept in the series. The opening episode sets the premise quite well for the series.

The way the characters reveal their darker side as the story moves on has been showcased well. The BGM is also very effective and elevates many scenes in the narrative. The actual mystery is unveiled well in the end. The production design is also very good in the show.

A better supporting cast could have done wonders for this show. The premise is good but in many areas, the show goes down because of the relatively new cast who tries hard to ham and brings an irritating effect. There was no need of so much skin show in the series. The show has many layers and they do not create that kind of a gripping effect. perhaps, to make the show gripping, the makers added many subplots that were not handled well.

Overall, Mafia is a youthful series that has a good premise and decent narration. The twists are executed well but the subplots divert your attention and drag the show here and there. Apart from this, Mafia ends up as a passable watch this lockdown period.